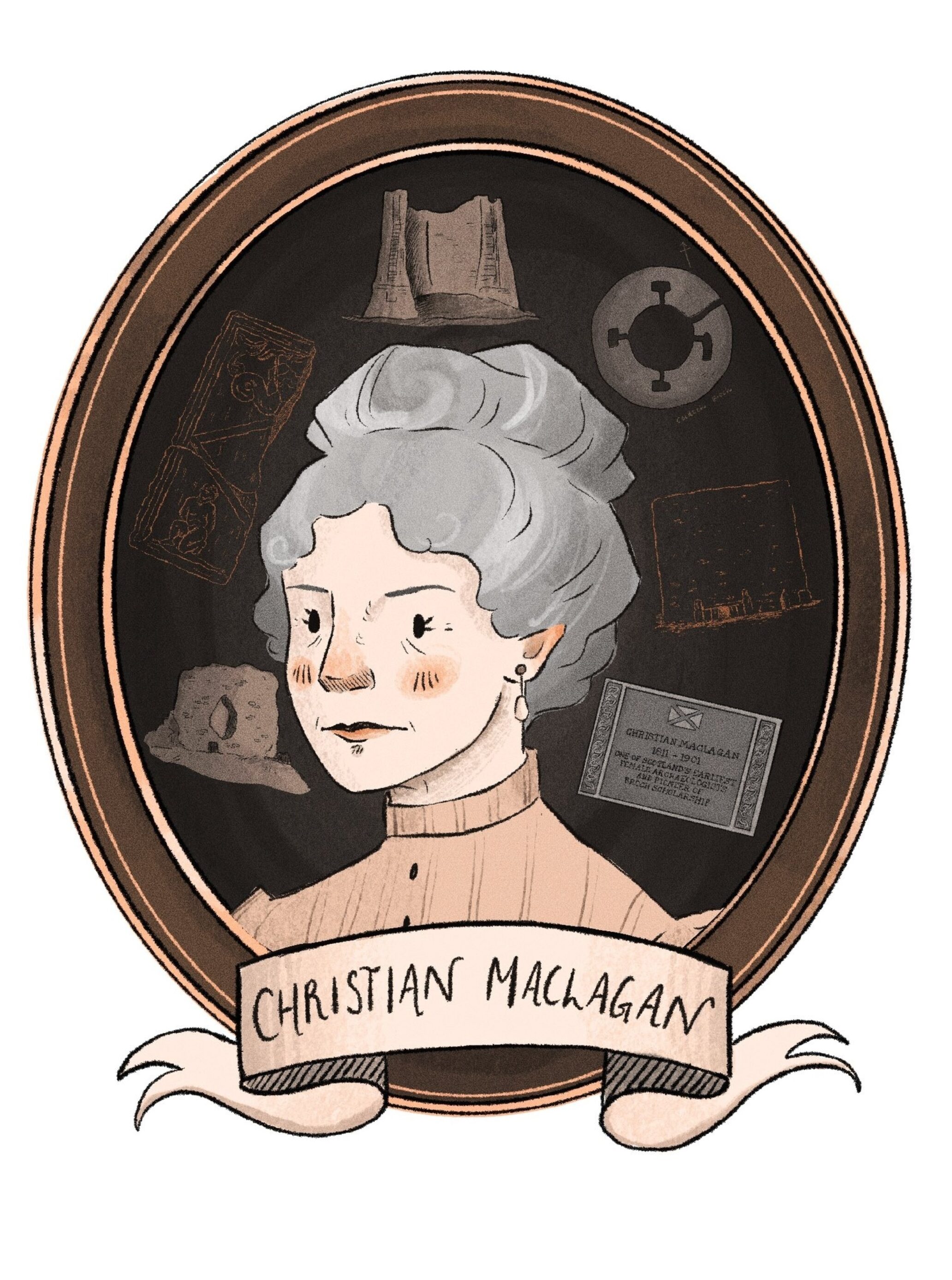 Our next Amazing Antiquarian, Christian Maclagn (1811 - 1901), is super special: she's the only woman to feature in this series!

This blog post is guest-written by Morag Cross, who has been researching Christian for several years, and Dr. Murray Cook, in a wee 'blog-within-a-blog segment.

Morag tells us Christian's astounding story: a woman of dogged determination and conviction in the face of sexism and prejudice...and Murray talks a little bit more about some of her astounding archaeological achievements.

(And, despite Christian inspiring life, there are no photographs or images of her. And so we are indebted to Morag Cross for her description of Christian, and we thank the wonderful Morven Anderson for bringing her to life!) 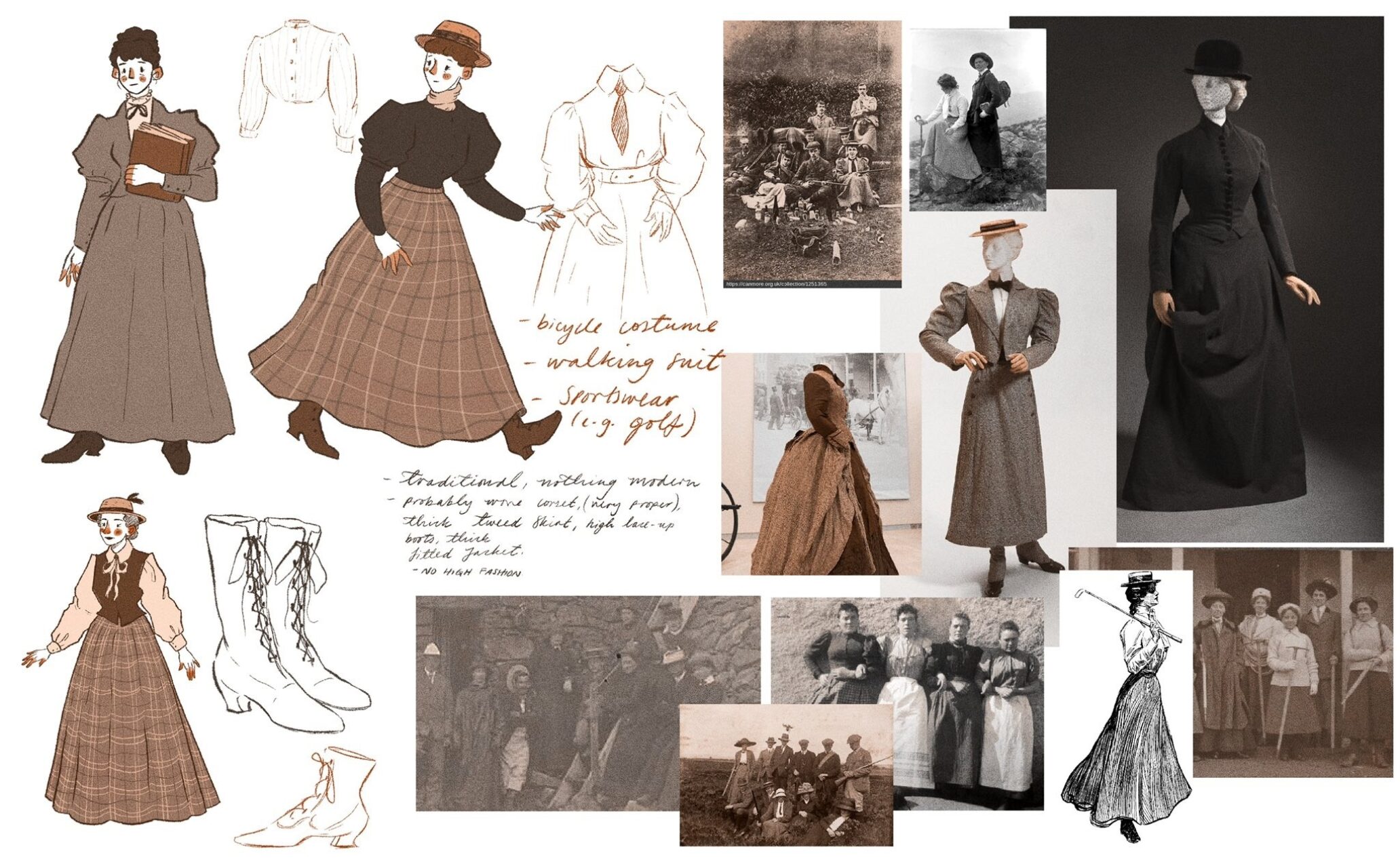 Sketches by Morvern Anderson in her efforts to bring Christian Maclagan (1811 - 1901) back to life! (Image credit: Morven Anderson Art) 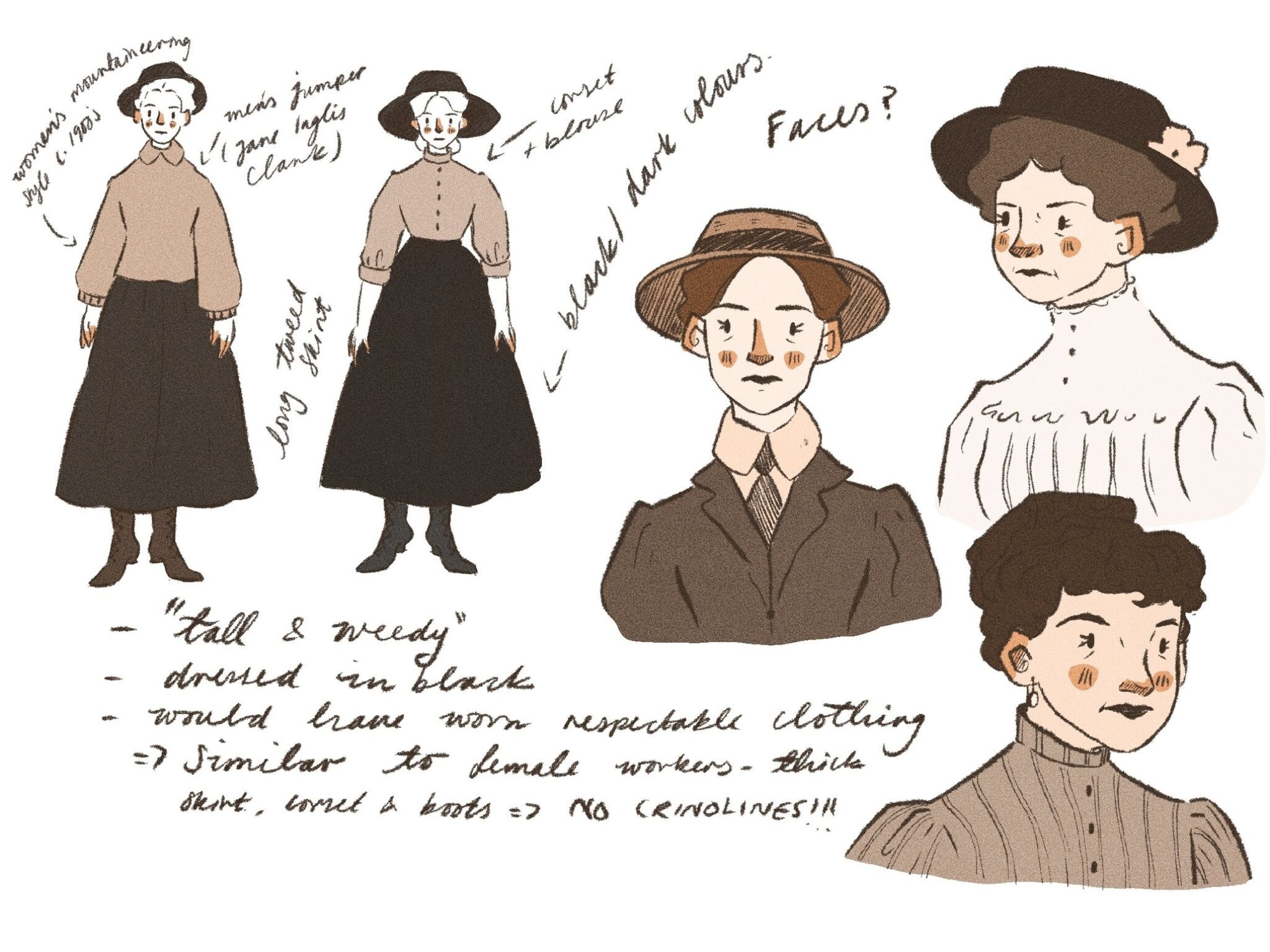 Sketches by Morvern Anderson in her efforts to bring Christian Maclagan (1811 - 1901) back to life! (Image credit: Morven Anderson Art)

Christian MacLagan was one of the myriad unsung women, scraping away (other suitable cliches are available) at the masculine face of Victorian archaeology. She's mistakenly been called ‘the first female archaeologist in Scotland/Britain/anywhere’, but she wasn't. That was an honour over-optimistically first applied in 2003.

(Lady John Scott, nee Alicia Spottiswoode, is earlier - you can read more about her in this blog!)

Regardless, Christian is at least the second woman (after Lady John) to excavate and publish her own results in Scotland. Her efforts require no artificial exaggeration – Christian’s energy in late middle age, touring, measuring and recording stone circles, tombs and hillforts is breathtaking. 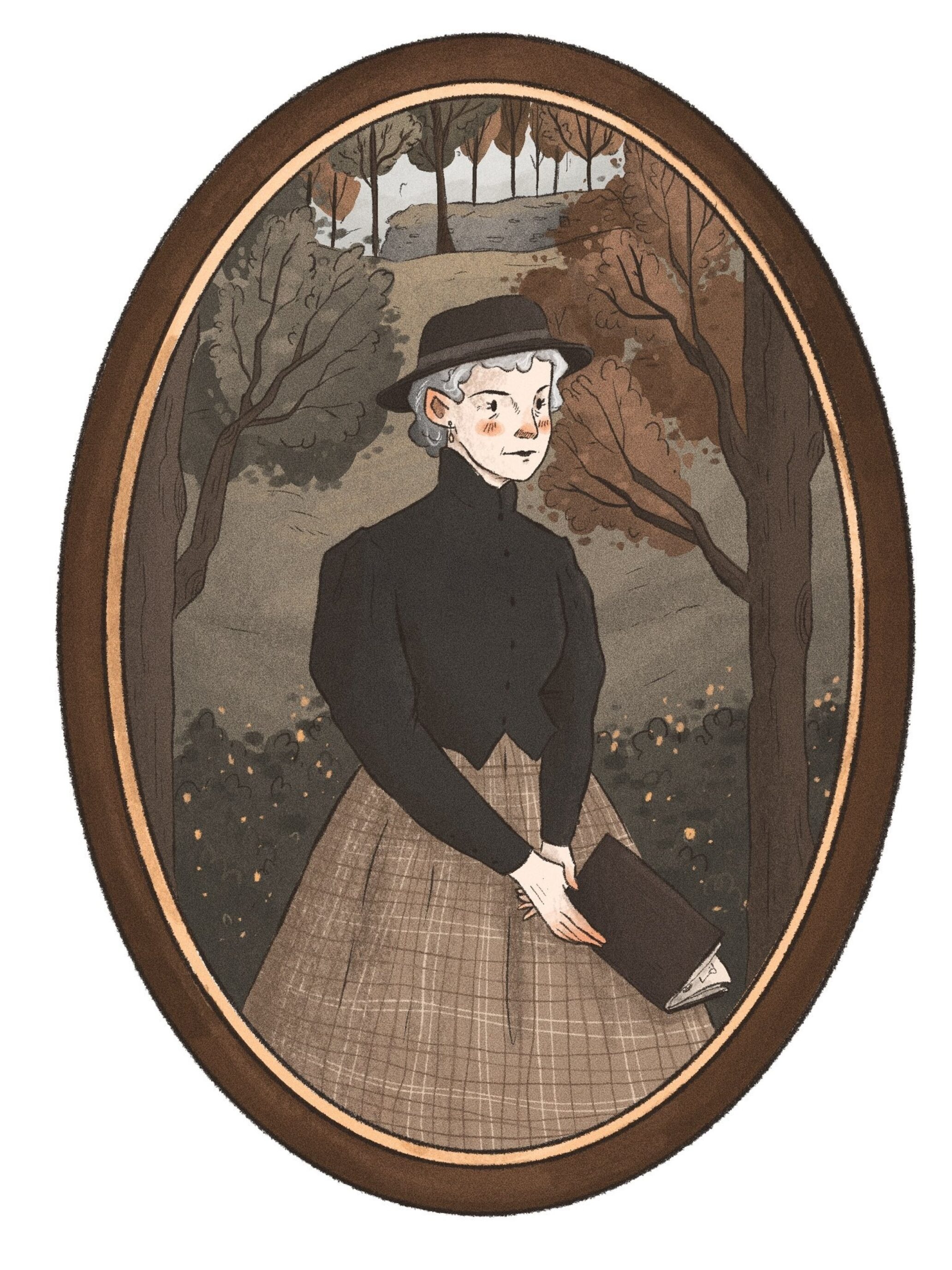 She was born in 1811 in Denny, Stirlingshire, daughter of a well educated but unsuccessful distiller who died early. Her mother's relatives, indigo planters in Bengal, supported the MacLagans in Edinburgh and then Stirling. Christian was a fiercely singleminded woman, devoted to her brothers in Kolkata, and to the Free Church of Scotland. She was a follower of the domineering Stirling minister Rev Alexander Beith, and when she inherited a considerable 'indigo' fortune in 1859, she unilaterally commissioned a new, rather unnecessary church in Stirling, from famously-eccentric architect, F T Pilkington (designer of Barclay Viewfield Church towering over the Meadows, Edinburgh).

Christian's tragedy was that she was acutely aware of her intelligence, but also knew that she was had been born 'before her time'. Victorian provincial society was suffocatingly male-oriented, and she made heroic efforts to overcome this. Sadly, her stubborness made life harder than it need have been, an issue separate from the prevailing sexism of the times.

Above: A sad reminder of the prevailing attitude towards women at the time - all that remains of Christian's personal identifiers is this signature found in one of her works by Stirling's Lost Broch Project

Christian published four books, around a dozen papers, meticulously citing her sources (just like the male authors did), and including plans and elevations of brochs and stone circles, all drawn by herself. She emphasised the importance of personal observation, and reached sites from Caithness to Sardinia by train, cart and on foot. Despite complaining in later life that she wasn’t a full member of the Society of Antiquaries of Scotland, she conveniently omitted her long, active participation in the equivalent society in Stirling. She could read out her own papers there, but instead, chose to let her female secretary do so instead. In so many ways, Christian’s actions and words were contradictory, perhaps a sign of her determination and strong character. 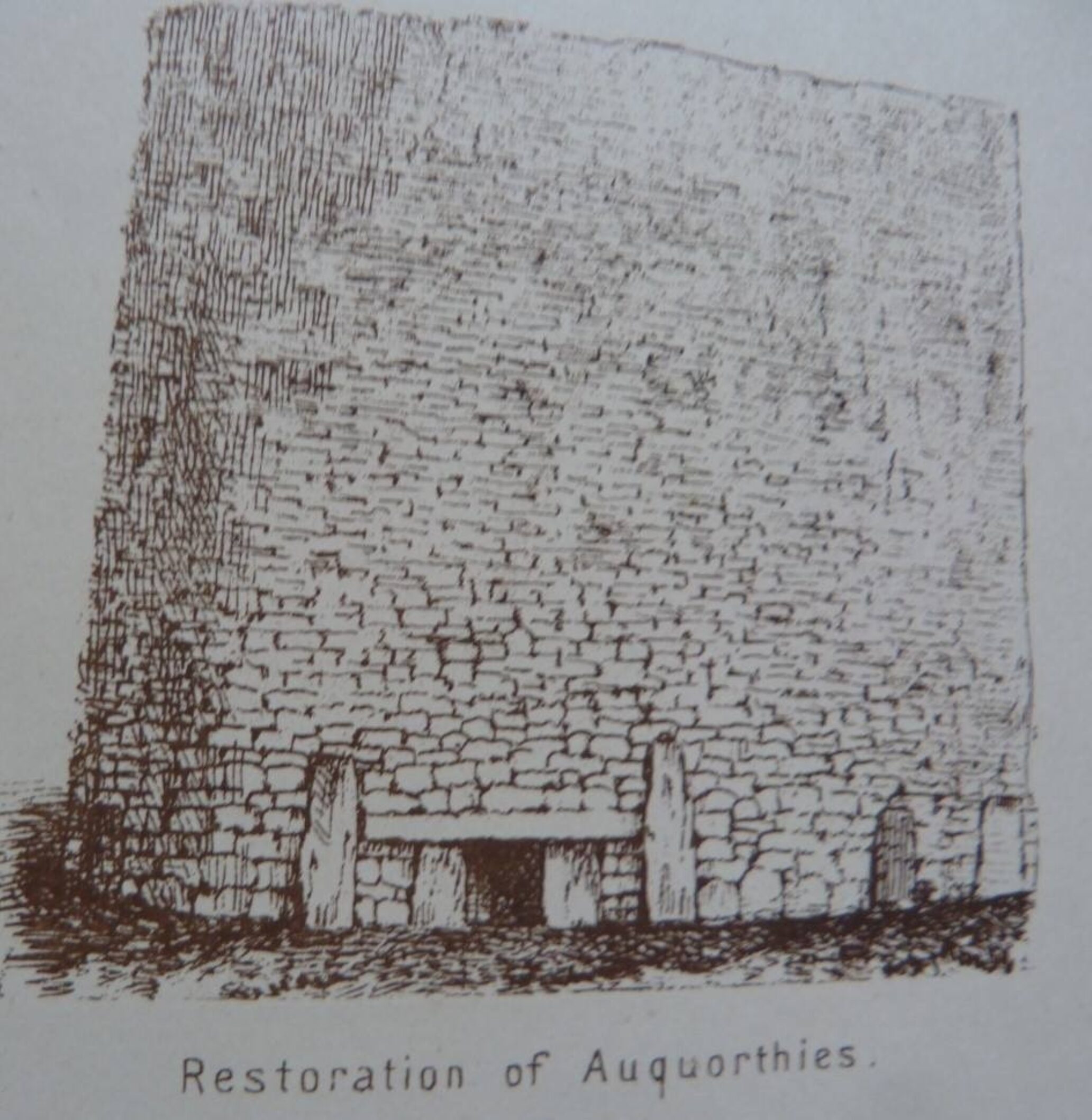 Above: Auqorthies recumbent stone circle in Aberdeenshire, rather wildly reimagined by Christian as a broch

She was obsessed with certain theories invented by herself, such as stone circles being the robbed-out ruins of brochs, or Neolithic tombs being houses, rather than burial places (see her visualisation of the Easter Aquhorthies recumbent stone circle above). This must be forgiven, considering her invaluable legacies – recording and preserving the outlines of so many field monuments, now lost.

This fact, however, is not lost on Dr. Murray Cook, who has been on the case of some of Christian's 'lost' monuments, including a possible broch...

In her footsteps…following a pioneer: Christian MacLagan in Stirling. 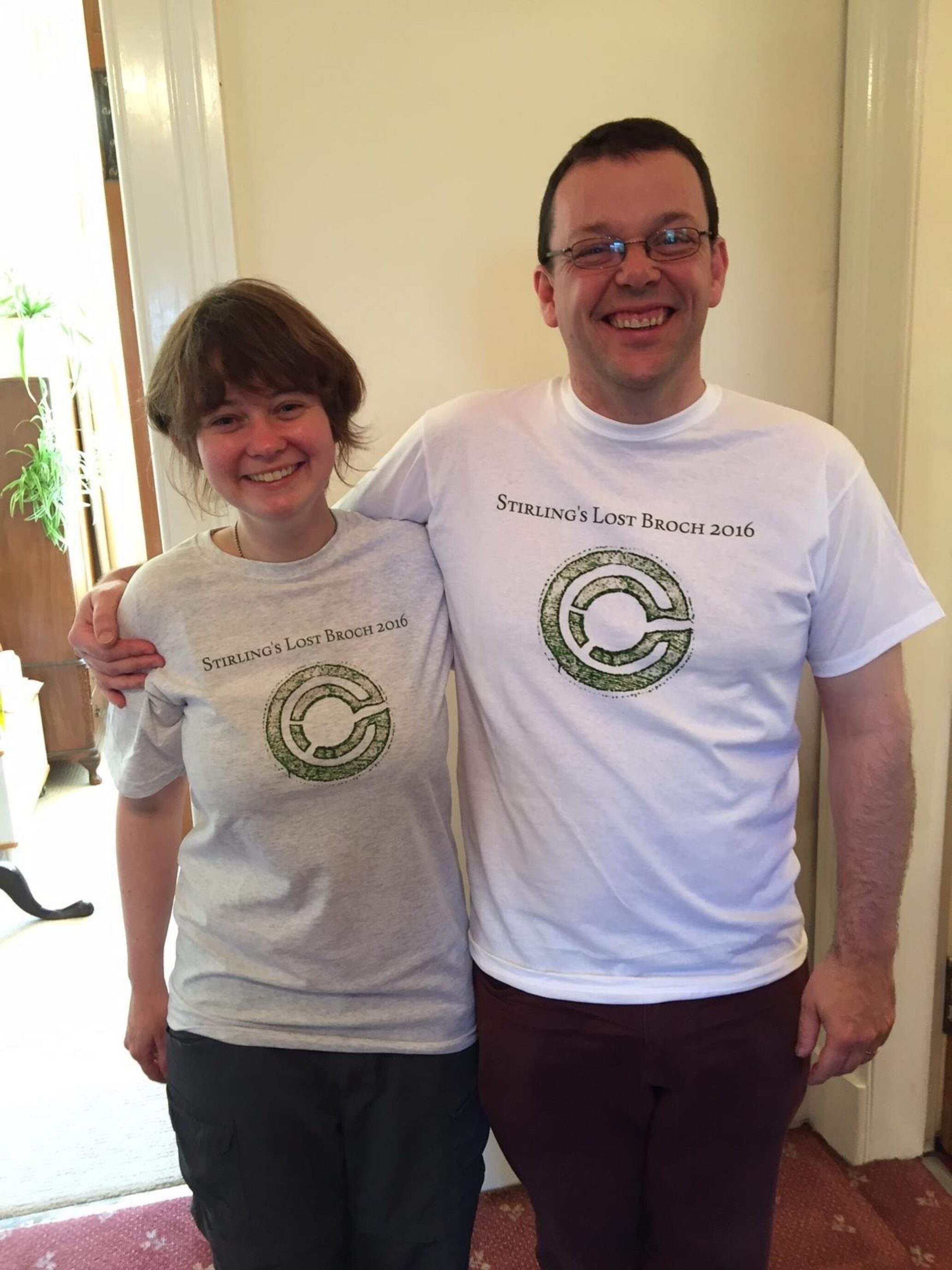 Christian MacLagan has a strong claim to have recorded the world’s first archaeological section at Coldoch Broch near Doune in 1870, although the excavation was led by the discoverer of chloroform James Young Simpson. Regardless Christian was a pioneer and the first person to think of brochs as houses and her notes and records form the first layer of archaeological recording around Stirling where she lived and is buried. 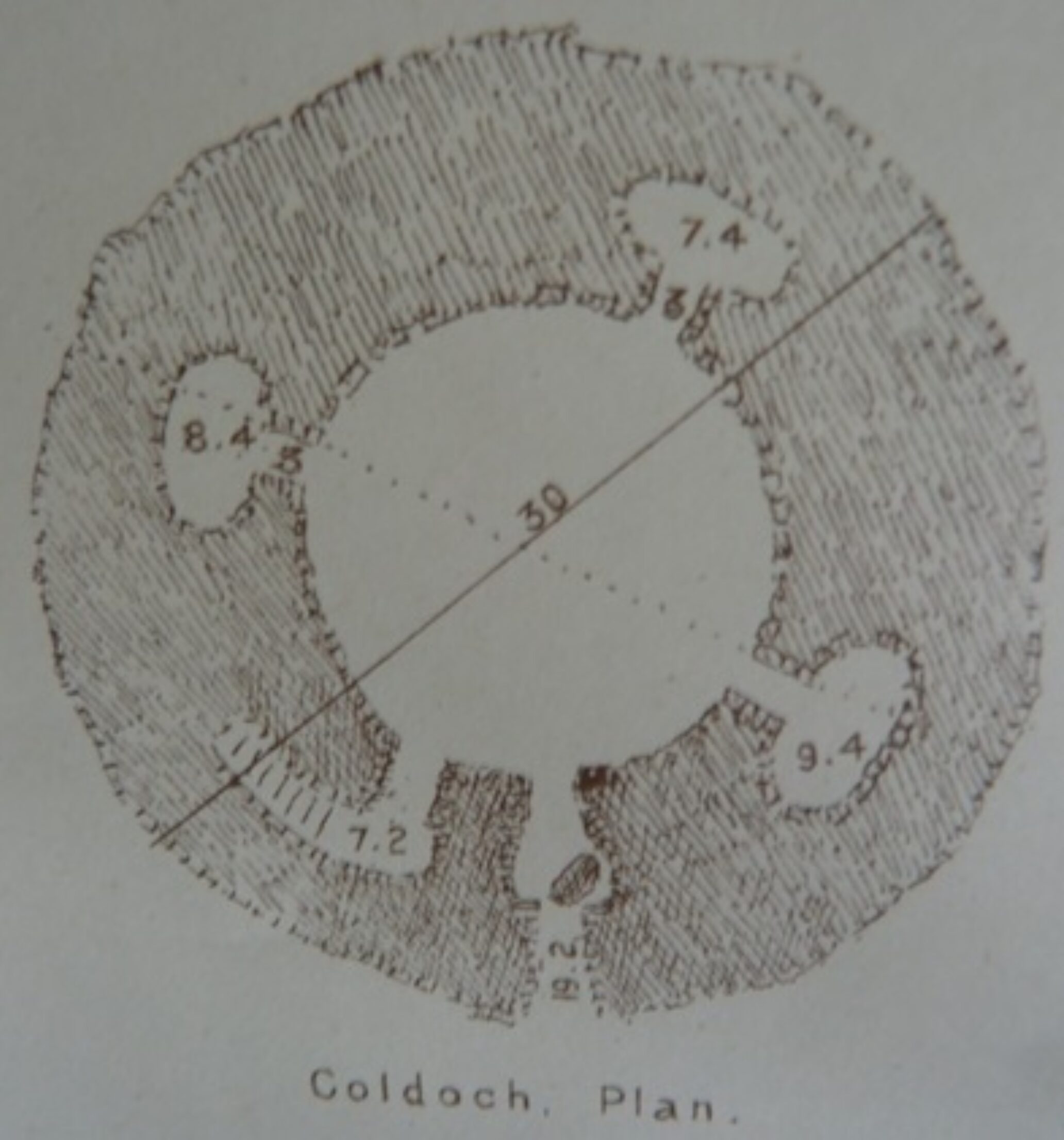 On and off over the last 10 years as Stirling Council’s Archaeologist I have tried to follow her footprints and breathe life into her plans and sketches. This included what may be a lost broch which I think we found but I’m not sure! 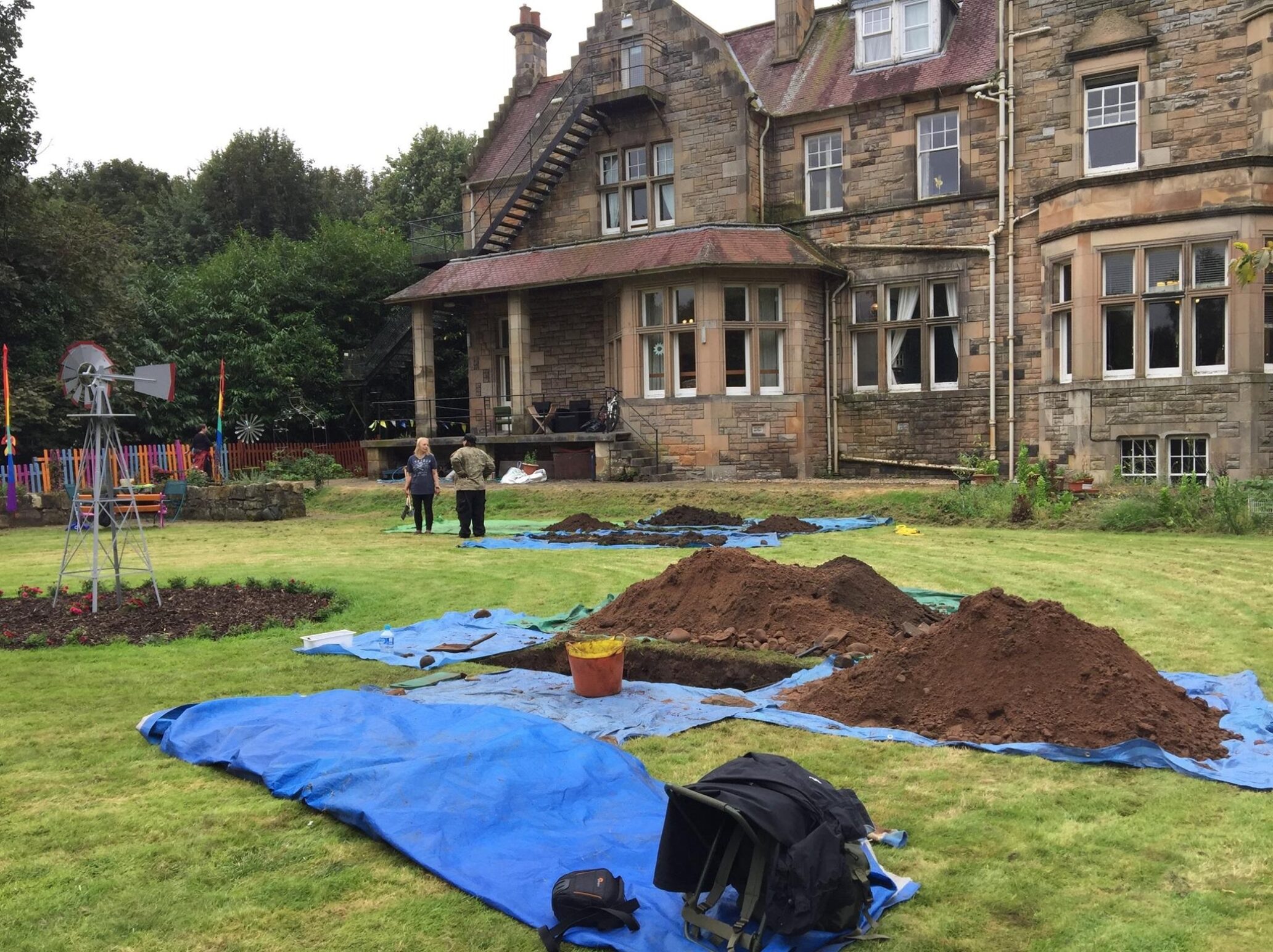 Above: The excavation for 'Stirling's Lost Broch' (or not?)

Perhaps the most iconic of the sites she recorded was the hillfort on Abbey Craig, overlooking Stirling and the lowest crossing point of the Forth…gateway to the north. Christian helped fund the National Wallace Monument which all but destroyed the hillfort’s interior. Her record shows a pair of circling ramparts, something that escaped the Royal Commission on Ancient and Historic Monuments in Scotland when they surveyed the site in the 1960s and who never thought to look up her records! 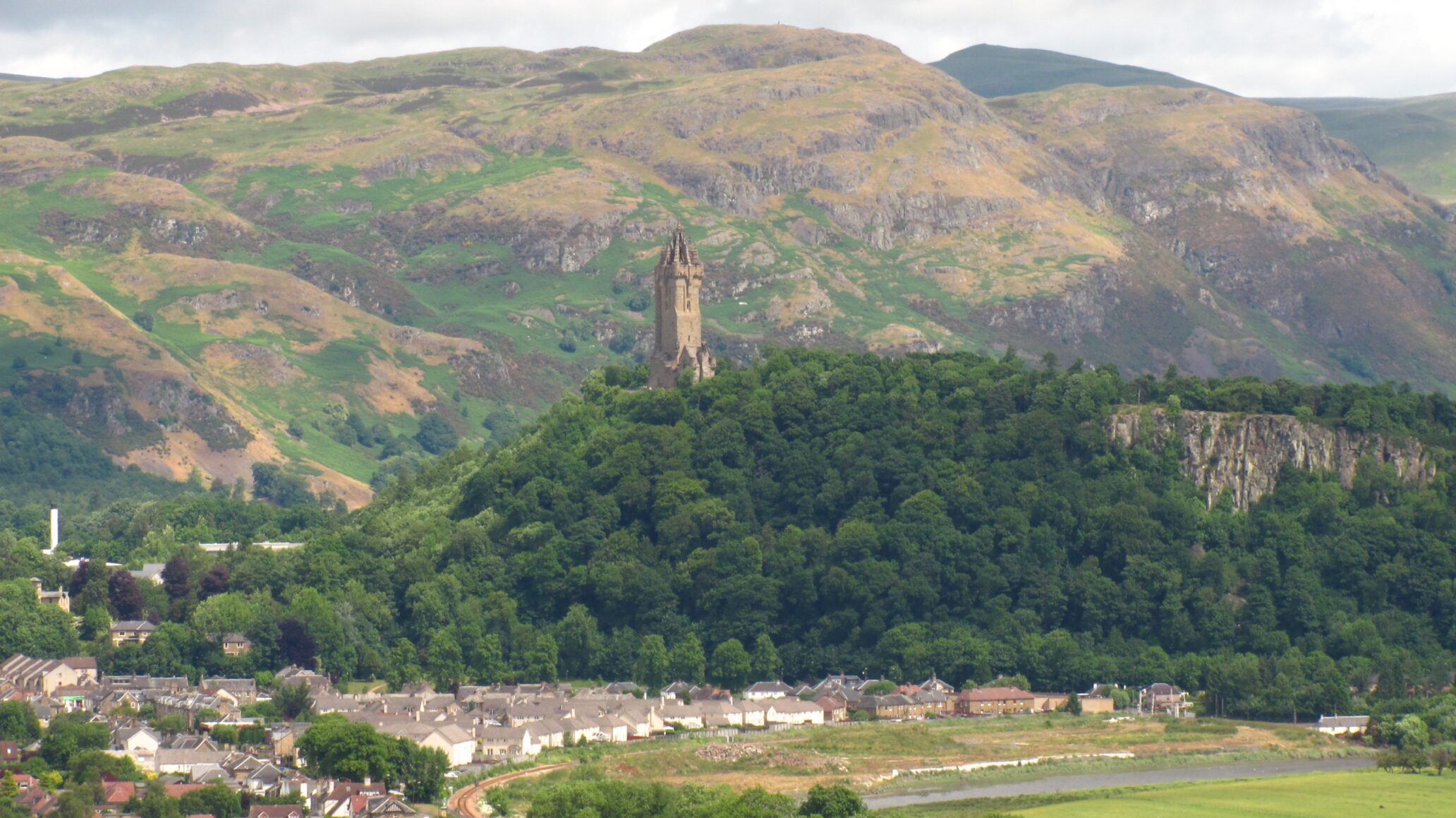 Above: Abbey Craig (Image courtesy of Janfrie1988 on Wikipedia) 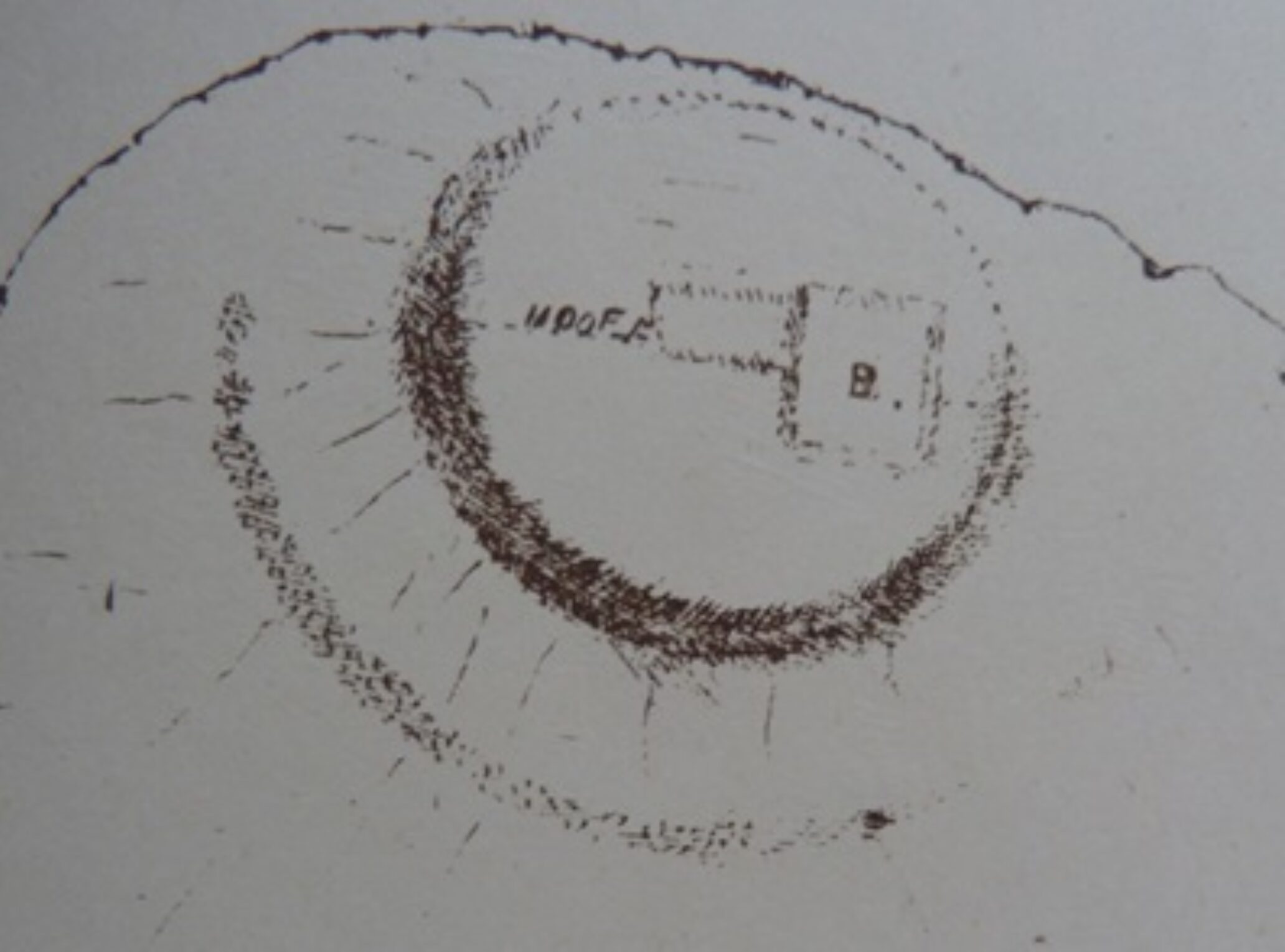 The outer rampart is still there though cut by the zig-zag path to the summit. Both ramparts were vitrified, destroyed in a fire so fierce and powerful that the stones reached in excess of 1000 degrees centigrade and melted and fused into each other. My excavations in 2018 exposed the disturbed core of this rampart and radiocarbon dating shows it was built after AD 772-976, using timber felled between AD 681-890, this suggests that the site was built between AD 772 and 890, with its firey destruction after this point. While we know neither who built the fort nor who destroyed it, the dates may be associated with the Battle of Dollar in AD 875 when Vikings overwhelmed the Scots and occupied large pats of Scotland. This may be one of the last hillforts ever built in Scotland and incredibly cool that it was first recorded by one of Scotland’s first archaeologists! 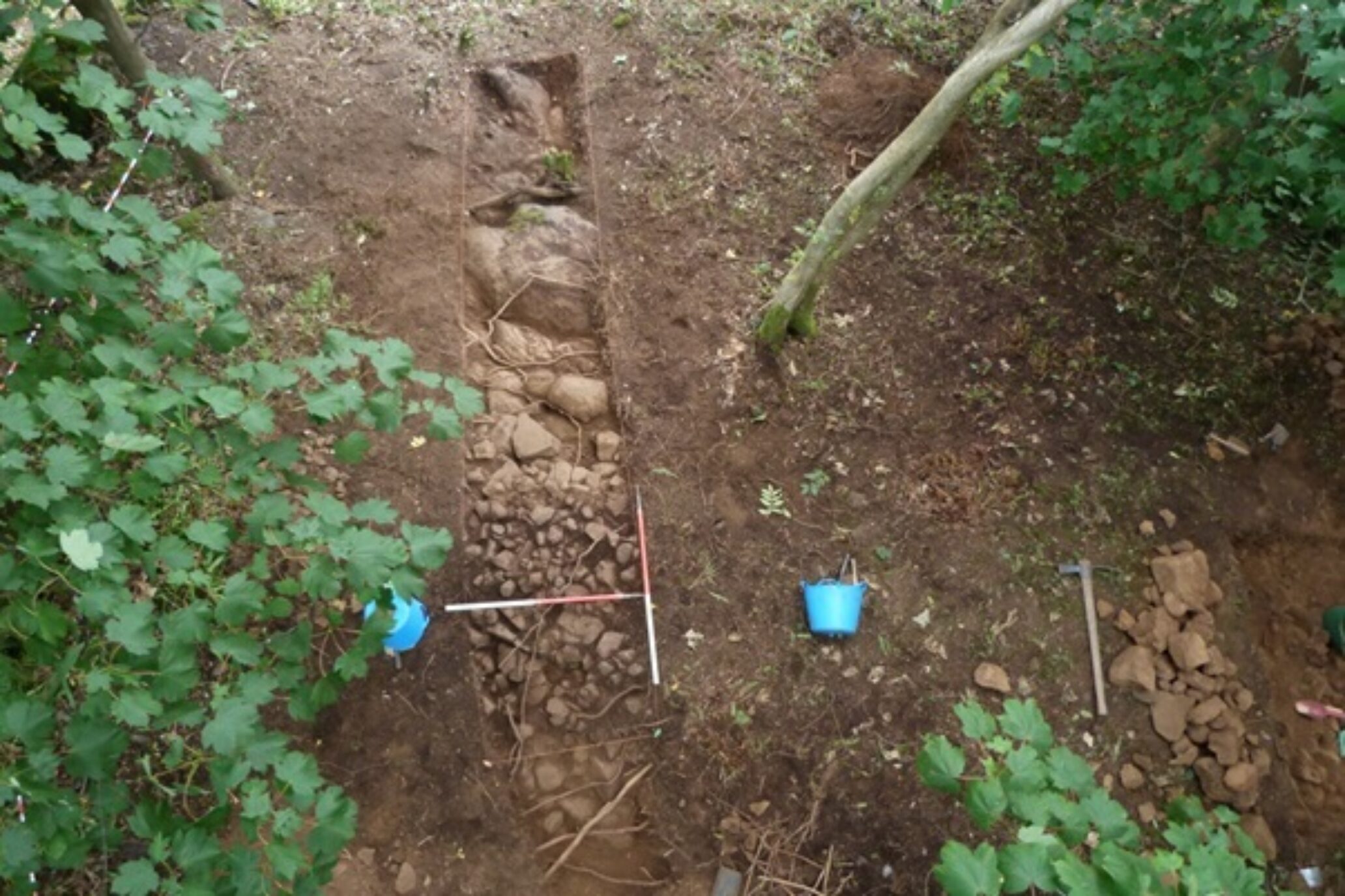 Above: The outer rampart of Abbey Craig under excavation (Image courtesy of Dr. Murray Cook)

We return to Morag's assessment of Christian Maclagan...

She also made hundreds of wax rubbings of early and later medieval carved stones, capturing details now lost, and creating remarkable works of art which were displayed to great acclaim in her own lifetime. 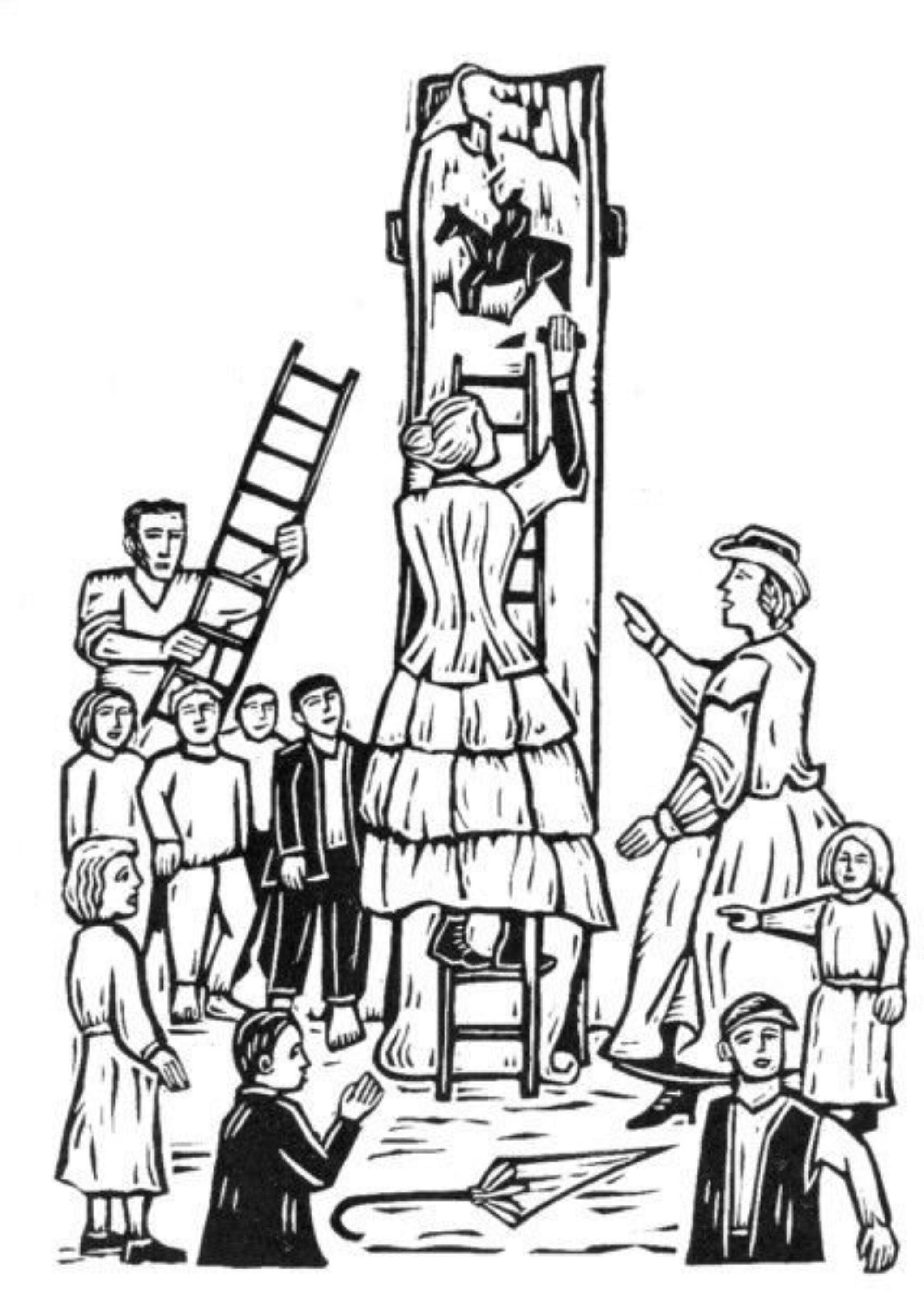 Above: An artist's impression of Christian 'rubbing' the stone (Courtesy of Stirling Museums)

The preservation of endangered and ephemeral information and women’s contribution to illustration and recording is undervalued, so whether all of Christian’s theories withstand academic scrutiny doesn’t detract from her rich archival contribution to the discovery and conservation of Scotland’s archaeological record.

Maclagan died in 1901, a few months after Queen Victoria, to whom she had dedicated her (self-published) magnum opus of 1875, ‘The Hill Forts, Stone Circles and other Structural Remains of Ancient Scotland’.

If you want to find out more, then you can check out Morag's work on Christian below:

‘Miss Christian MacLagan, pioneer Victorian antiquary and archaeologist: her early life, family and social context’, the first part of Christian’s biography, which was published in Proceedings of the Society of Antiquaries of Scotland, Vol 150 (2021), pp119-61.