What is a Broch?

Brochs are the most enigmatic structures of Scottish prehistory.

Not only are they the tallest prehistoric structures found in the British Isles, but they are also some of the most intensely studied buildings of Scottish archaeology. What is it about these fascinating remains that make them the focus of so much examination and controversy?

Massive circular stone towers woven into the archaeological landscape of Caithness, brochs are the most enigmatic structures of Scottish prehistory.

Sometimes referred to as the pinnacle of prehistoric Scottish architecture, brochs are the tallest prehistoric structures found in the British Isles. They have a long history of folklore, amateur enquiry, and academic investigation and excavation. Despite being one of the most intensely researched buildings in Scottish archaeology, there is still so much to uncover and understand!

What is it about these fascinating structures that make them the focus of so much examination and controversy?

Brochs are massive drystone towers built by the northern Caledonian tribes 2000 years ago during the middle Iron Age, between 400 BC and 100 AD. They are perhaps most notable for their sheer size – they are unusually tall structures for this period. Even today some brochs still stand between 10 and 13 metres to the wall head (the top of the broch). On top of this wall it is thought there would have been a large conical thatched roof, meaning that brochs may have stood over 16 metres high when fully constructed, ensuring that they were an imposing presence on the surrounding landscape. But it’s not just the grand height of these structures which makes brochs so compelling: brochs are also marvels of architecture and engineering.

The design of brochs demonstrates an unparalleled degree of sophistication and an understanding of materials and their limitations. To be able to build in drystone (that is to say, without mortar or other bonding agents) to such lofty heights without them collapsing required a number of ingenious features which lightened the heavy load of these towers. The walls of the broch were built incredibly thick – in fact 5 metres thick at the base – but, as the building rises, the walls become thinner, tapering inwards in a technique known as ‘batter’. This prevents the walls from toppling or bulging under the weight, thus creating a more robust structure, as well as reducing the weight of the upper levels of the structure. This tapering of the walls has given the broch its iconic ‘cooling tower’-like profile. Another way the broch builders reduced the weight of the walls was by creating a gap within the thick walls, essentially building two walls joined together by lintels to form two separate ‘skins’ with a hollow between them. The name for this gap is an intramural gallery.

The reason for building to such heights was to accommodate multiple floors within the building. Some brochs even had two suspended floors above the entrance level. Curiously, rather than access the first suspended floor via a stone staircase or wooden ladder in the inner space, the broch builders created a tapering helical staircase inside the wall, always ascending in a clockwise direction if viewed from above. In the case of Mousa Broch, the stairwell goes to the top of the structure, though this appears to be the only example of this design and may even be due to imaginative rebuilding by antiquarian conservators. Another intriguing aspect of broch architecture are the ‘cells’. These are small, bee-hive shaped rooms with corbelled stone ceilings, which can be accessed through low narrow doorways. 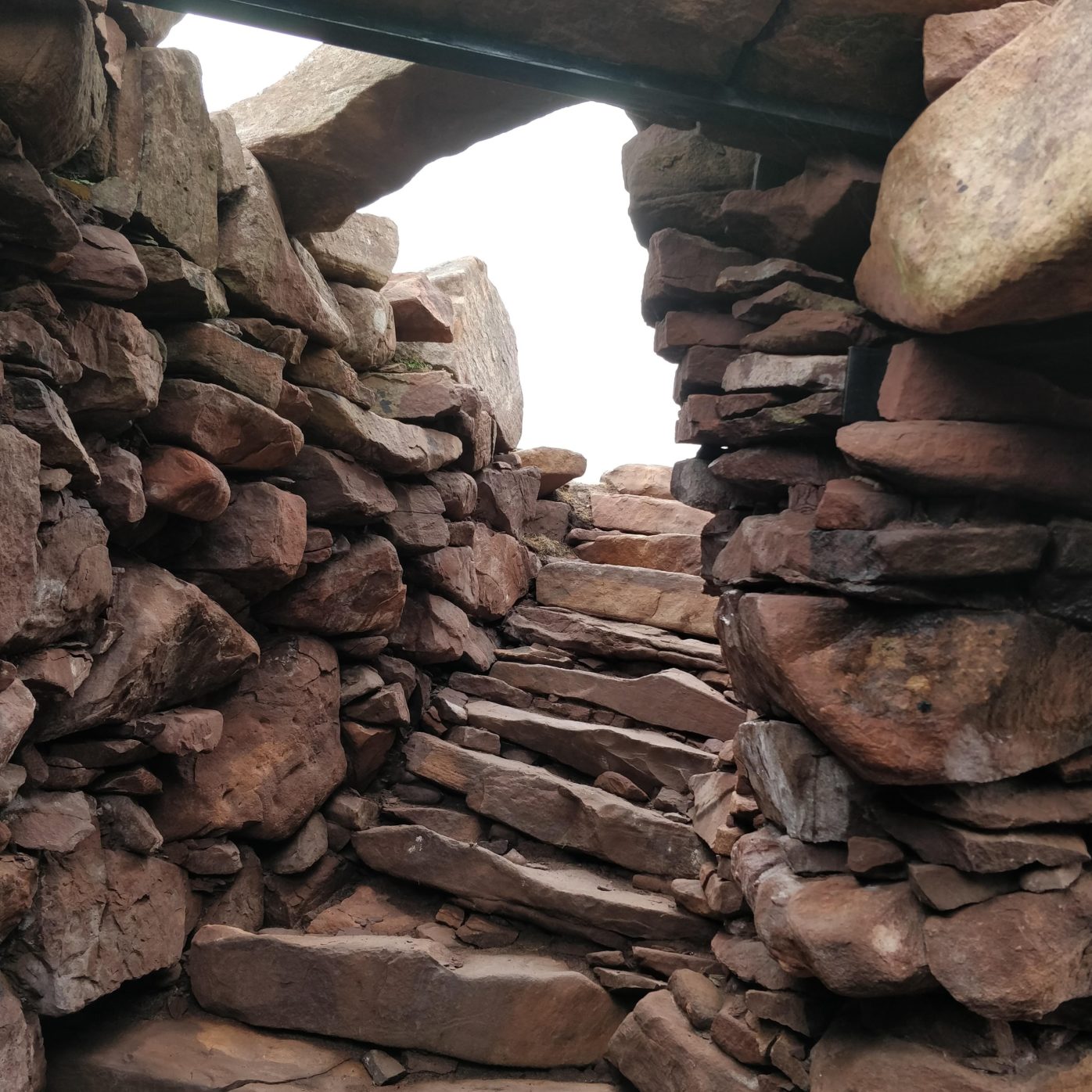 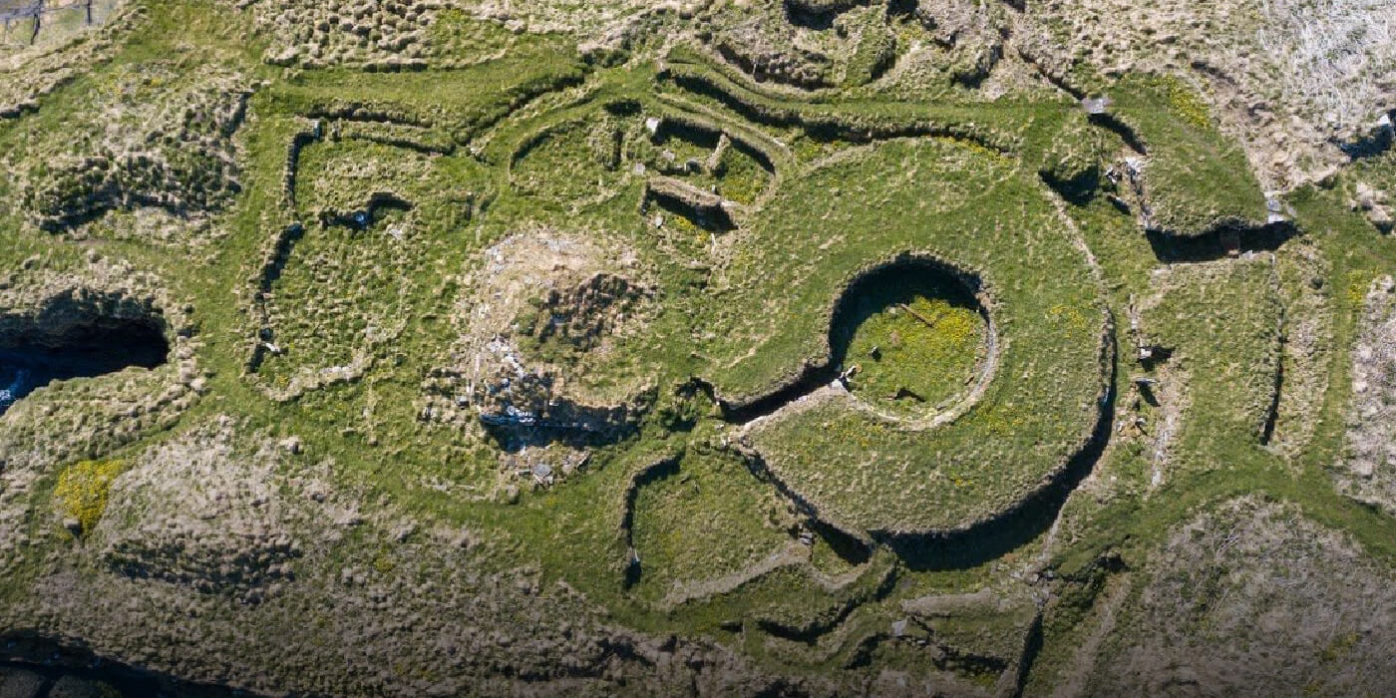 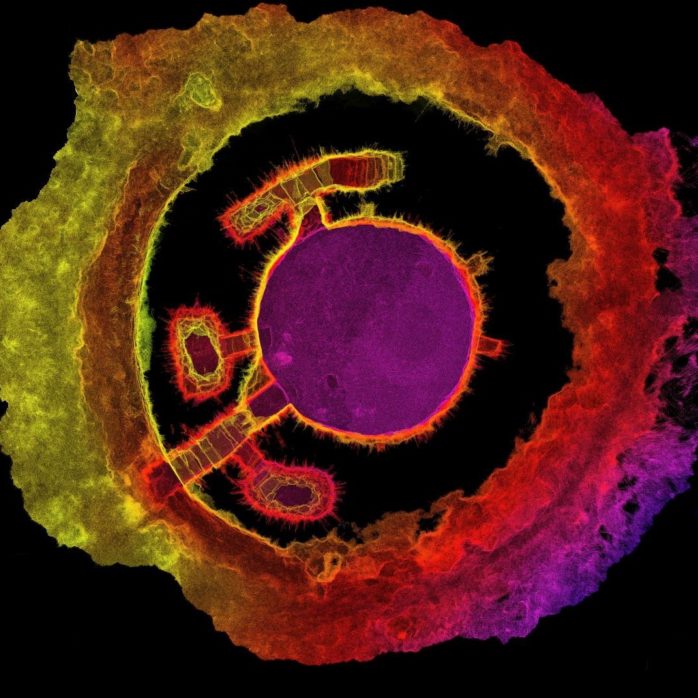 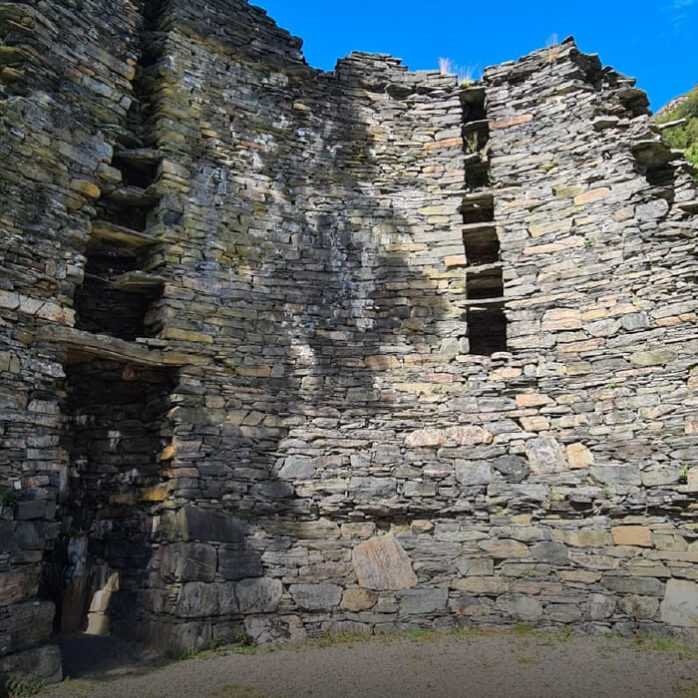 Another curious feature of broch design is the entrance. Having no windows, the single entrance was the only means of access to the building. A long narrow passage with a low ceiling penetrates the thick walls, forcing anyone who entered to stoop down. About half-way down the entrance passage was a stout door secured by logs which would brace the door from the inside. Behind this door, and built within the walls, was a small cell, which is typically called the ‘guard cell’, though its use is unclear.

How these magnificent structures were used by those who constructed them has been the focus of much controversy and debate for almost two centuries! Firstly, they were thought to have been defensive fortifications due to their thick walls and castle-like features. More recently, however, and due to examination of archaeological remains found within brochs, it is thought that they represent the dwellings of farming communities – though they are clearly much more than a simple house and place to sleep. These buildings represent the nexus of the communities which inhabited them: a place where a number of roles and activities were carried out, including the processing and storage of grains for food, crafts like weaving and clothes making, even ritual activities like depositing the remains of dead family within the broch itself! From archaeological evidence we can tell that brochs had a complex history of use, and were not just places where the inhabitants slept – they were the centre of their social, cultural and communal life.

Brochs were integral to the culture of the Iron Age peoples of Caithness, and to this day they form an important part of Caithnessian heritage and identity. Despite being a fairly-well researched part of Scottish archaeology, there is still so much more to learn about these complex and captivating structures. 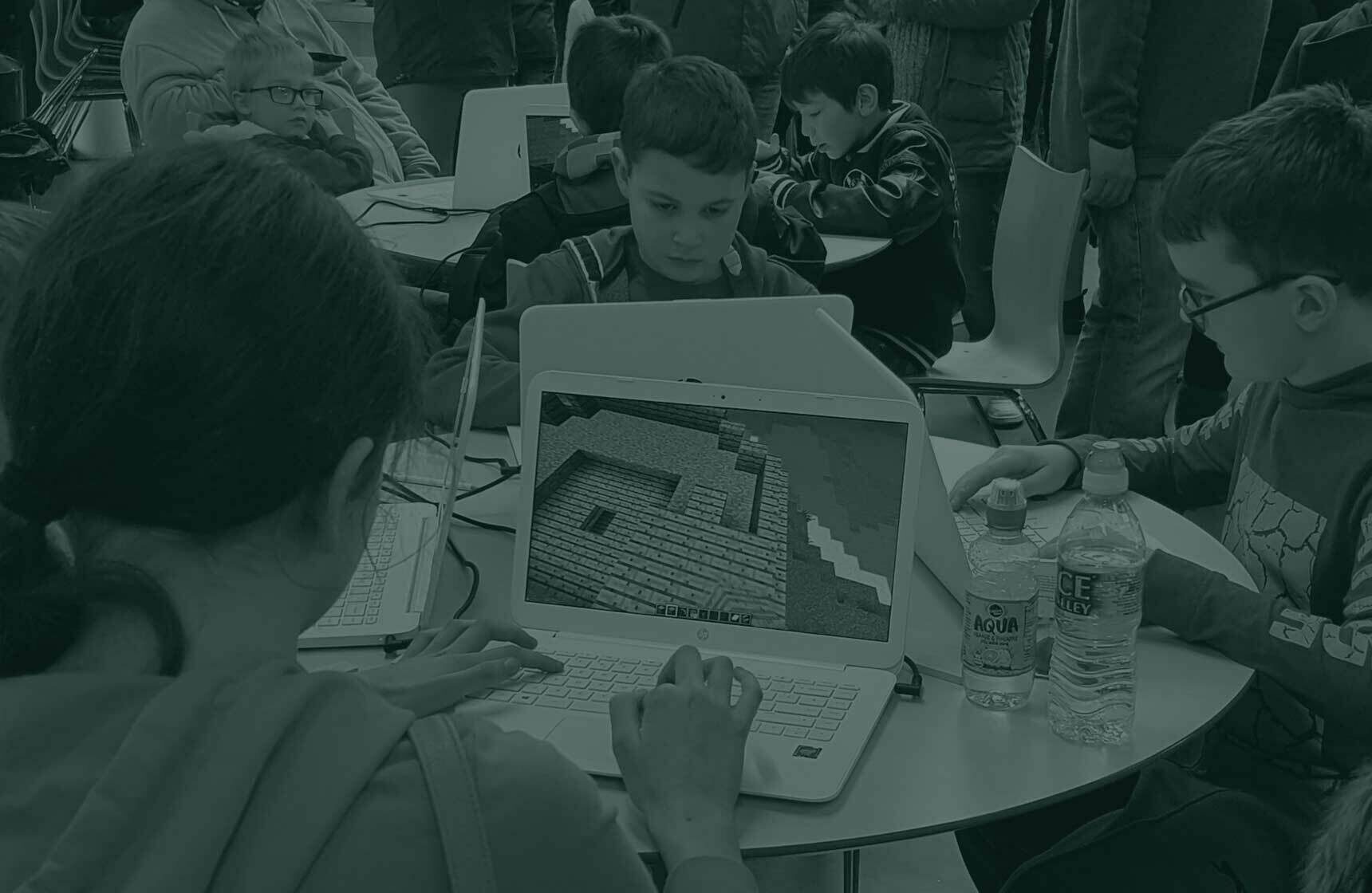 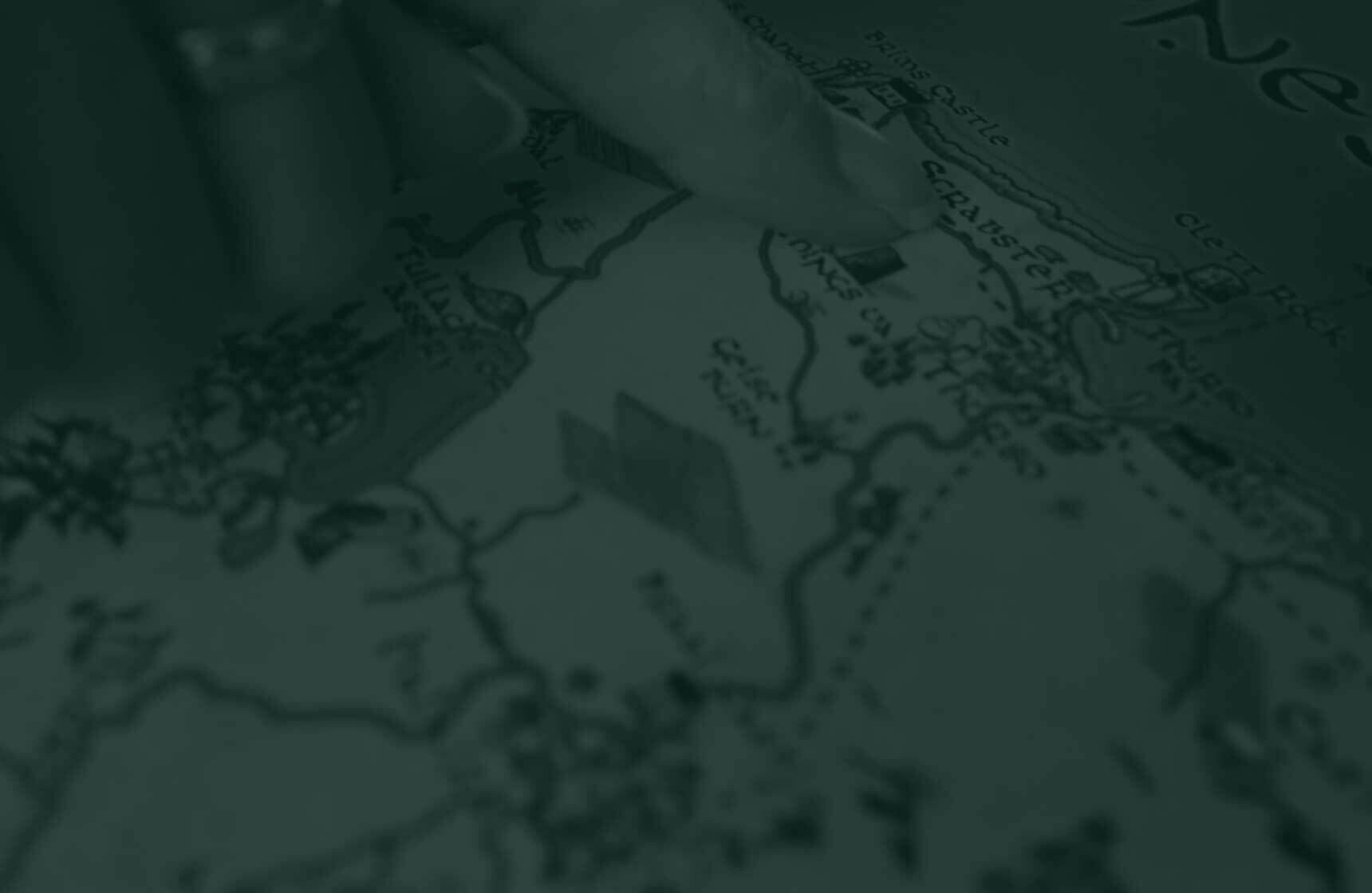