Ousdale Broch had been described by both Elizabeth Beaton as the best-preserved broch in Caithness and Colleen Batey as a ‘well-preserved’ broch: yet when Iain Maclean and Kenneth McElroy visited the broch in 2015, they were in for a shock…

Ousdale Burn Broch is located just barely a mile north of the Caithness/Sutherland border, just south of the quaint village of Berriedale. Situated at the bottom of a hill which overlooks the Ousdale Burn and the Allt a' Bhurg (which translates to Stream of the Fort), it is an impressive location. In 2013, when Iain Maclean had previously visited, it was still an impressive-looking monument.

But when Iain and Ken re-visited in 2015, Ousdale Burn Broch was in a sorry state. Excavated in 1891 by Captain James Mackay, originally of Braemore, a buttress had been built against the inner wall by the entrance to stabilise it after all the material inside the broch had been removed. At some point between 2013 and 2015 this had collapsed, shifting much of the stonework around the broch, meaning that walls had started to bulge dangerously. Additionally, a rowan tree had been growing out of the broch since at least the 1960s, displacing stones and impacting on the overall integrity of the structure. It was appalling to see what was one of the premier archaeological sites in Caithness in this state.

Caithness Broch Project decided to take action. Working alongside Historic Environment Scotland to produce structural reports – first with Andrew Mennie of Fairhurst and then Addison Conservation & Design – to understand whether the structure was too far gone in terms of damage, or if it could be ‘saved’. Thankfully, it was agreed that it was still possible to consolidate the structure. But we had to act fast!

We set about acquiring funds for the project: this was provided by Historic Environment Scotland's Historic Repair Grant Scheme, Highland LEADER programme and the Beatrice Caithness Community Fund. This was a major scheme of conservation, and £180,000 was raised in total towards not only conservation works, but also the creation of a new car park, trail to the broch, and interpretation panels.

Work began in late 2019, with G Brown Stonemason and Addison Conservation & Design leading the conservation works. Before work began, archaeologists from Clyde Archaeology took a detailed record of the broch, and would be present on-site to watch over the works. Historic Environment Scotland mandated that the broch should be repaired where necessary and stabilised from further decay, but not extensively rebuilt. New material was kept to a minimum.

The conservation works began in earnest with the removal of the rowan tree – bad luck according to some! Though in the event, the base of the trunk and the roots were left alone as they had become one with the stonework. Work could now begin on shifting the rubble from the collapsed buttress. The stone here would be re-used to consolidate the entrance, and to re-build at other key points in the broch, such as at the stairwell in the east, and over the cell roof in the southern section of the broch. Jarrah wood pinning was also used to help consolidate the broch, which is something of a pioneering technique in drystone conservation work.

By early 2020, and after the stonemasons at G Brown battled through some horrible Caithness weather, the conservation works had been completed. At the same time, Berriedale Braes road contractors RJ Macleod had helped to fill in and smooth over the lay-by, as well as creating us a small car park: these works were carried out for no cost – an incredibly kind gesture which helped to ensure that our project would not run over-budget and we offer our gratitude to RJ Macleod for this.

At the same time as the archaeological recording was being carried out, Highland Conservation specialist path contractors helped to create a brand new 1km-long trail down to the broch. This path skirts past the settlement of Borg immediately to the east of Ousdale Broch; a post-medieval clearance village with some intriguing long-house or black-houses style remains. The name ‘Borg’ is actually the Norse name for ‘Broch’, so it’s easy to see why this place is named so! 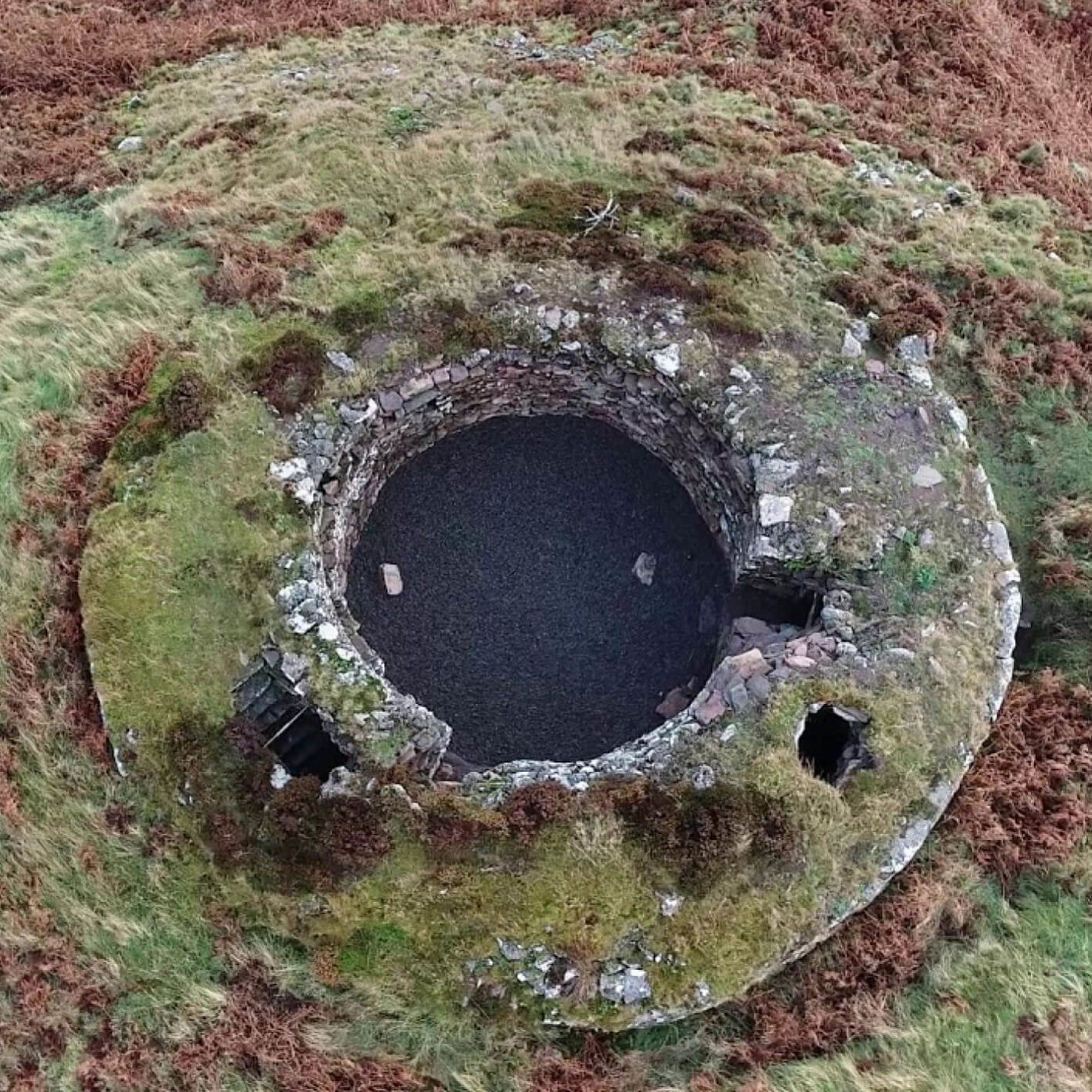 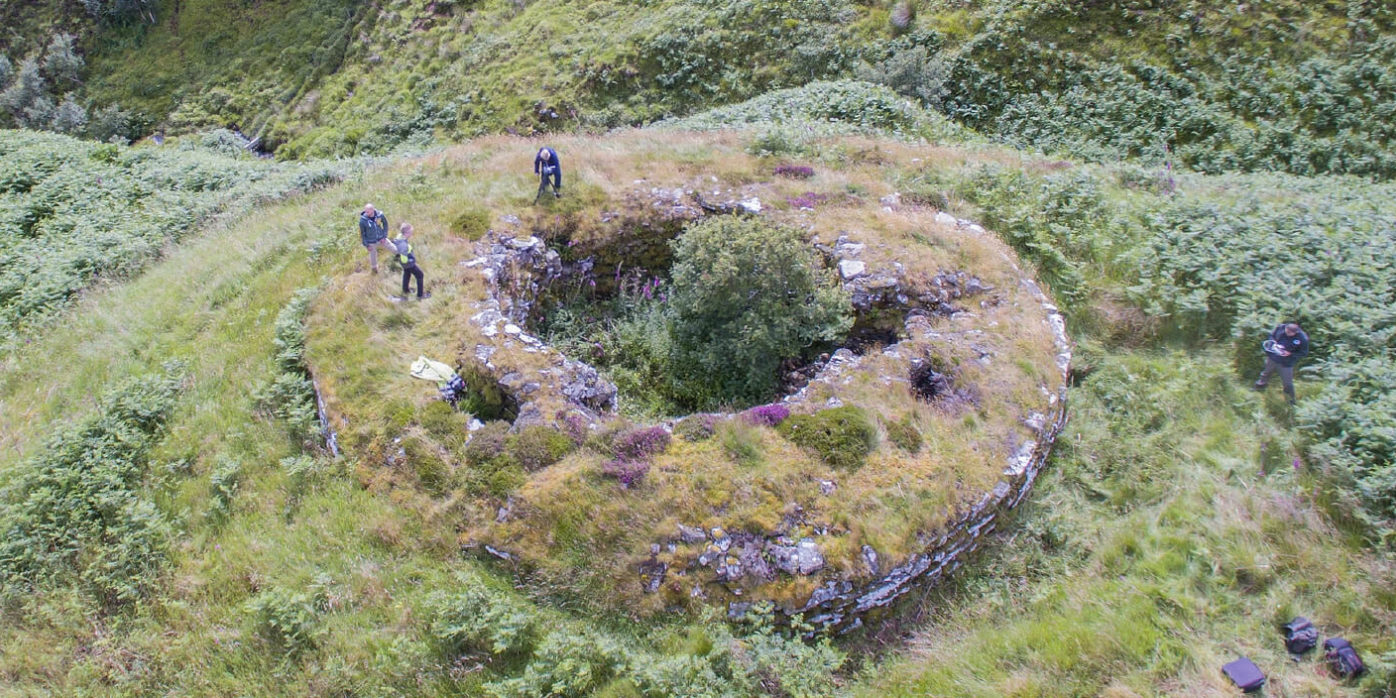 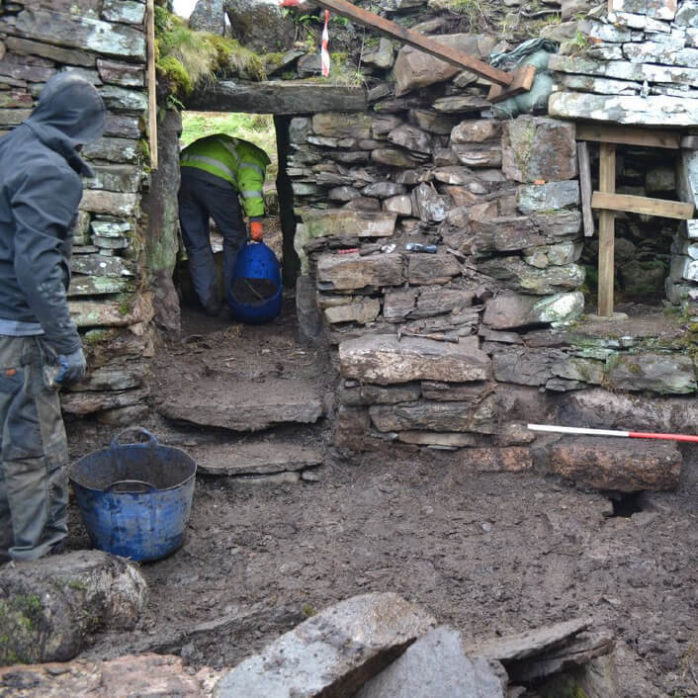 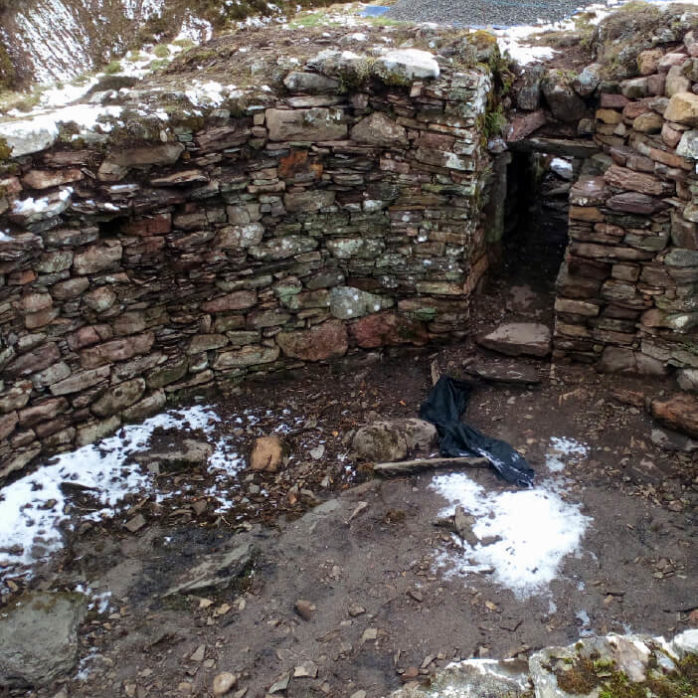 The project was a huge investment from the team in terms of time and effort – we oversaw almost every aspect of the project, and ensuring that everything ran smoothly. We didn’t even let a fly-tipped caravan on our brand-new car park get in the way of things – a big thank you to Speedy Skip hire of Thurso for removing this!

We were also very busy with one particular aspect of the project – designing the interpretation panels. Robin Herrick, chairman of CBP, was particularly involved in this aspect of the project, but we worked together as a team to create what we think are some striking and informative panels. They’re packed with tales of Ousdale: did you know that ‘the Ord’, a section of road close to the broch, was once deemed to be one of the most dangerous roads in Britain – both in term of the precipitous nature of its construction, but also because of the bandits present on this stretch of road!

Today, thankfully, Ousdale Broch is much safer to travel to, and the structure is now completely safe and sound too. Our project was completed by December 2020, some five years or so after Iain and Kenneth had reported the damage. It was a long and time-consuming process, but one we are immensely proud of. 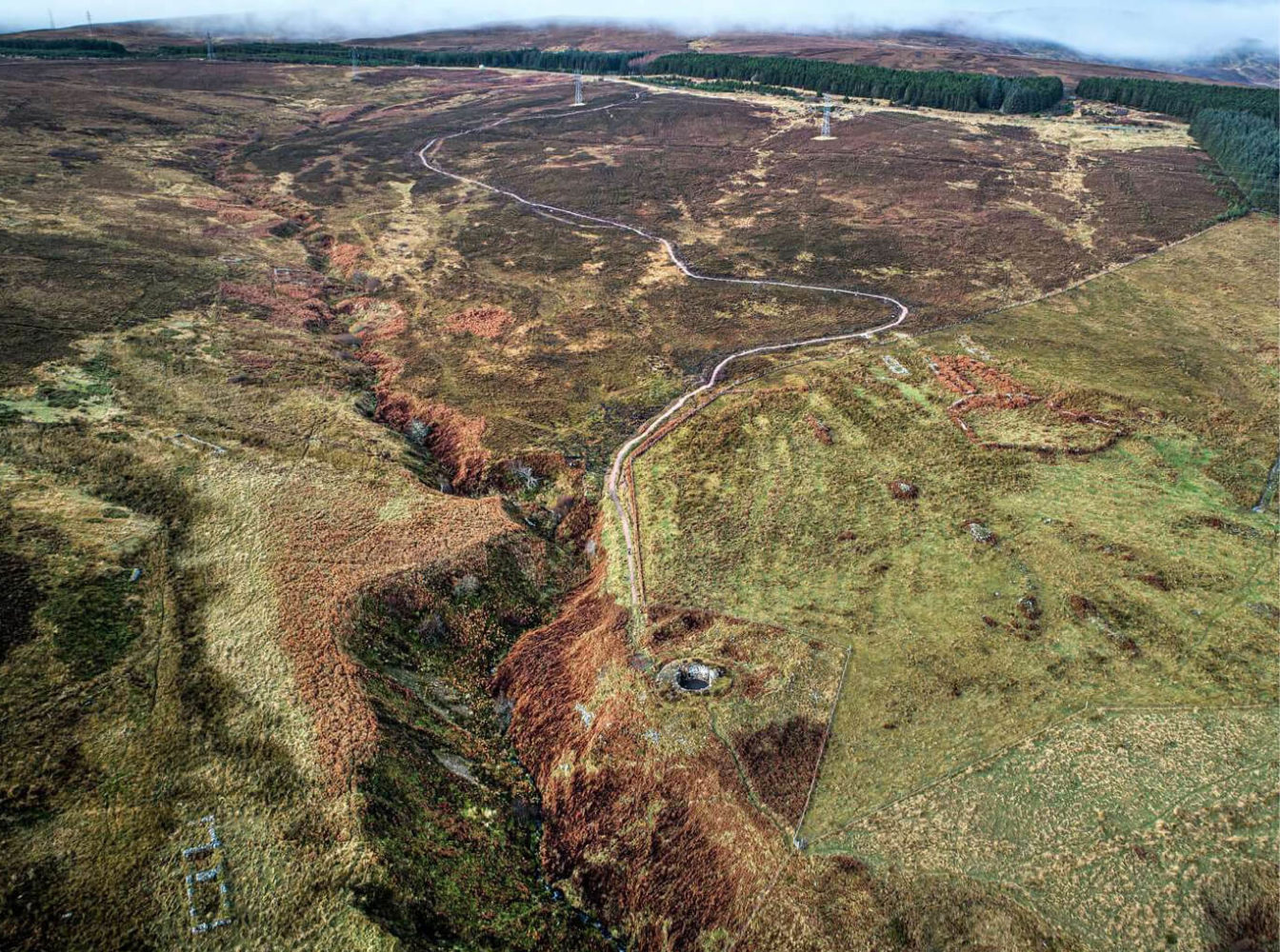 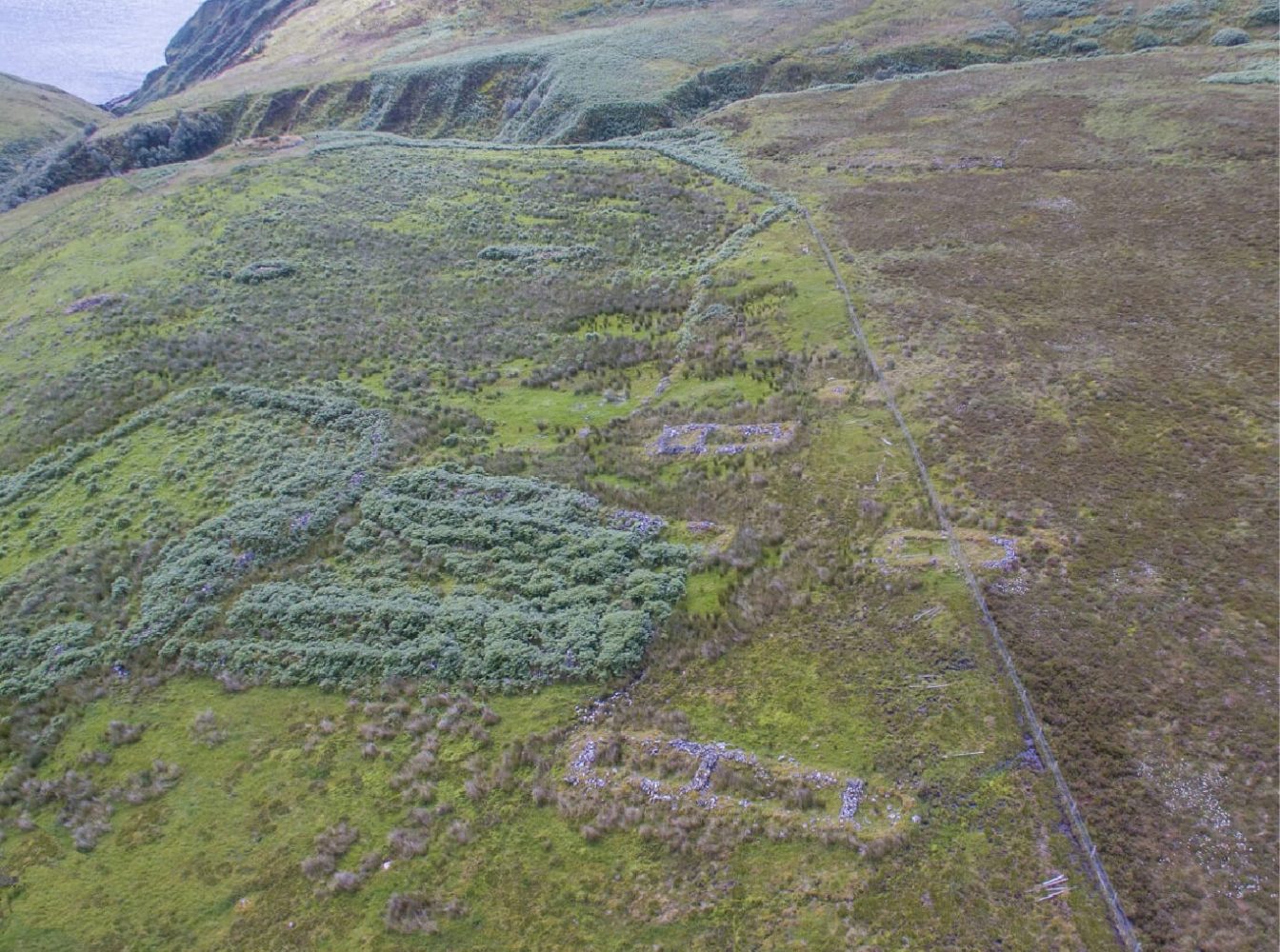 We hope that enjoy your visit to the broch.
Don’t forget to tag us on social media if you take any
photos, or use the hashtag below.

If you enjoyed your visit, leave a review on TripAdvisor
and Google Maps so other folk come and visit! 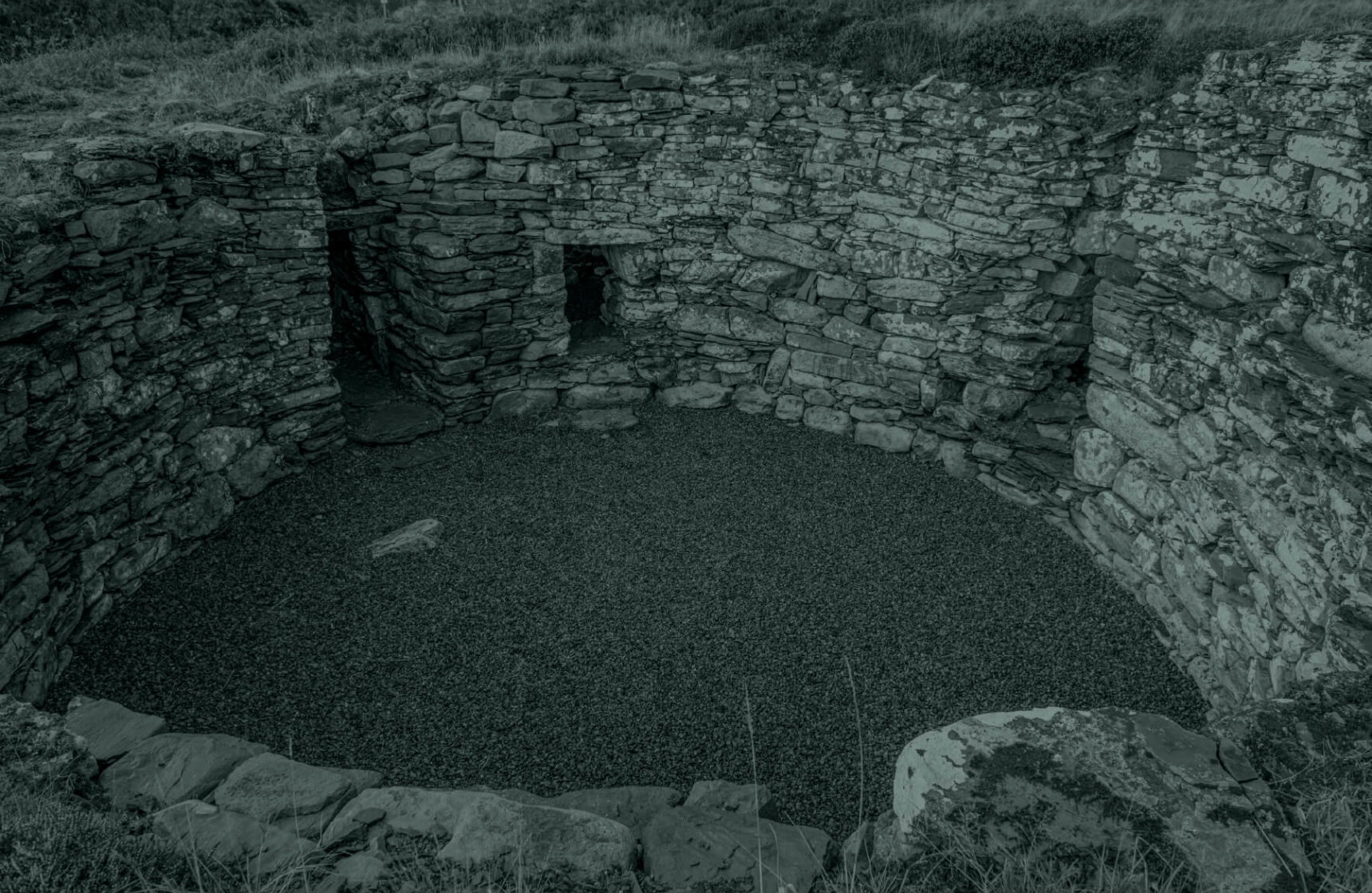 What is a Broch? 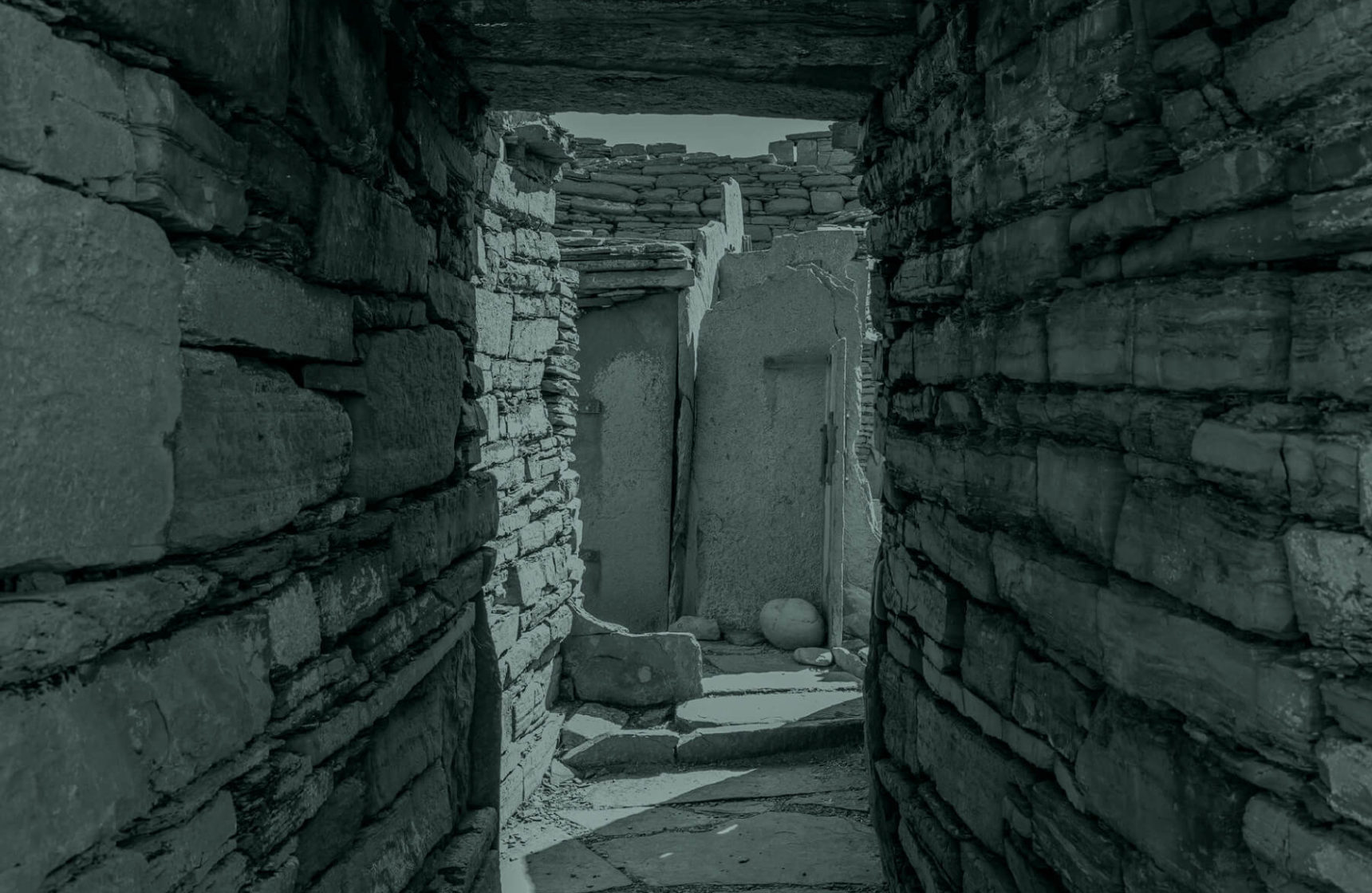