Wise words. And you know what, let's do that. Right now.

'Cos we're all about the past here at Caithness Broch Project. And so today we're embarking on a little meta-celebration of the past, where we celebrate the history of the study of...history!

We're celebrating 'antiquarianism' in a new blog series, with a wee look at some notable early archaeologists - also known as antiquarians - who investigated, explored or excavated brochs. Our little character bios are accompanied by charming illustrations by Morvern Anderson Art, helping to breathe some life into these half-forgotten characters. We think they are wonderful, so please do give Morvern a wee follow on her social media platforms:

We're so excited to tell you the story of our early broch archaeologists - just look at them all! How many do you recognise? 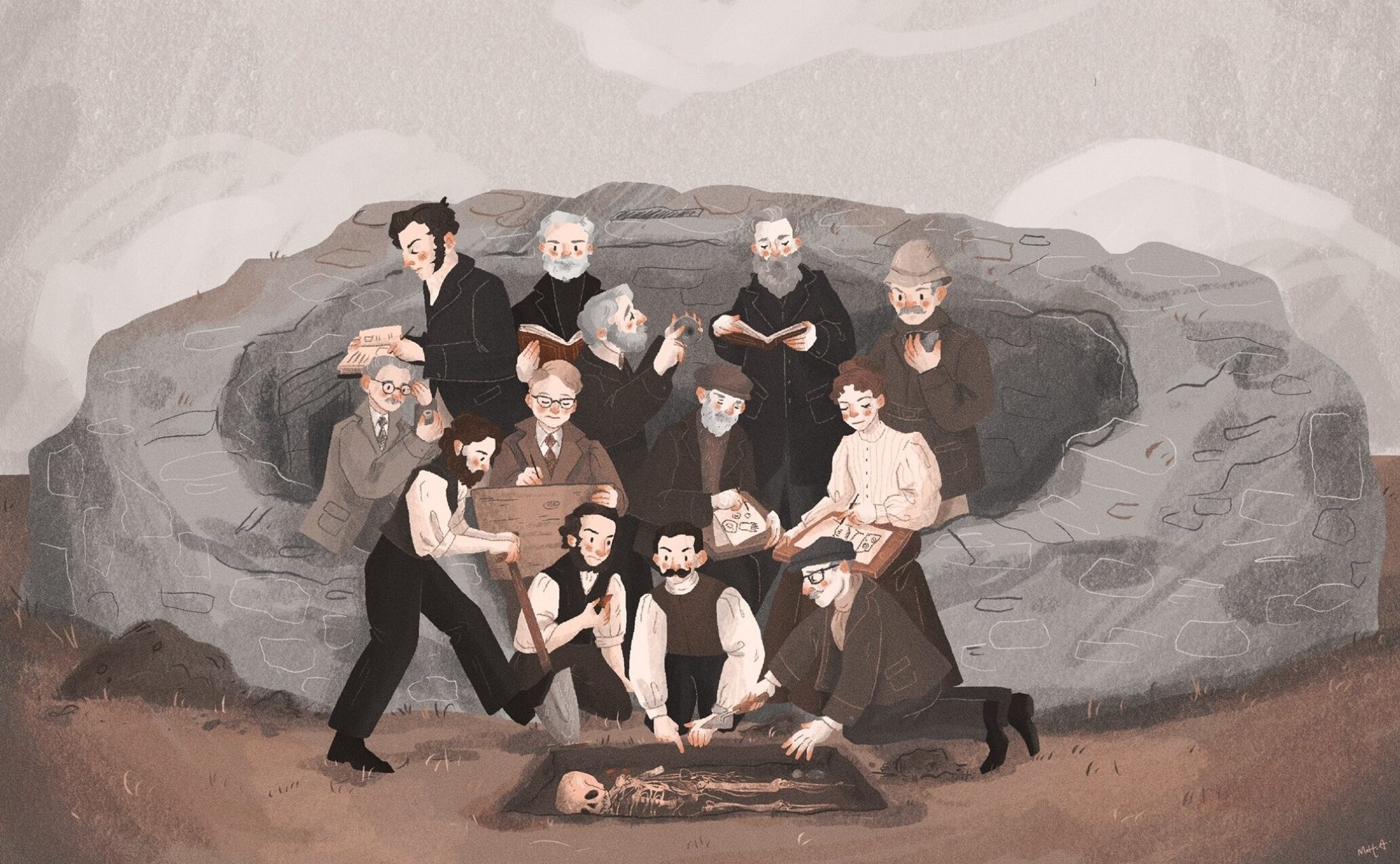 In this first post, however, we thought it would be prudent to discuss antiquarianism. What is it? What's an antiquarian? How old is archaeology? Well, stuff has been around for years, hasn't it? Like years and years. And old stuff has been around for like, YEARS. But what about the 𝘴𝘵𝘶𝘥𝘺 of old stuff? Academics, scientists, philosophers and other great thinkers have basically ruminated on the past for centuries: in fact, it may surprise you how long we've been interested in the past. It potentially goes all the way back to the Song Dynasty of Ancient China (around 1000 years ago!), where scholars analysed and catalogued a many great number of Bronze and Stone inscribed objects. 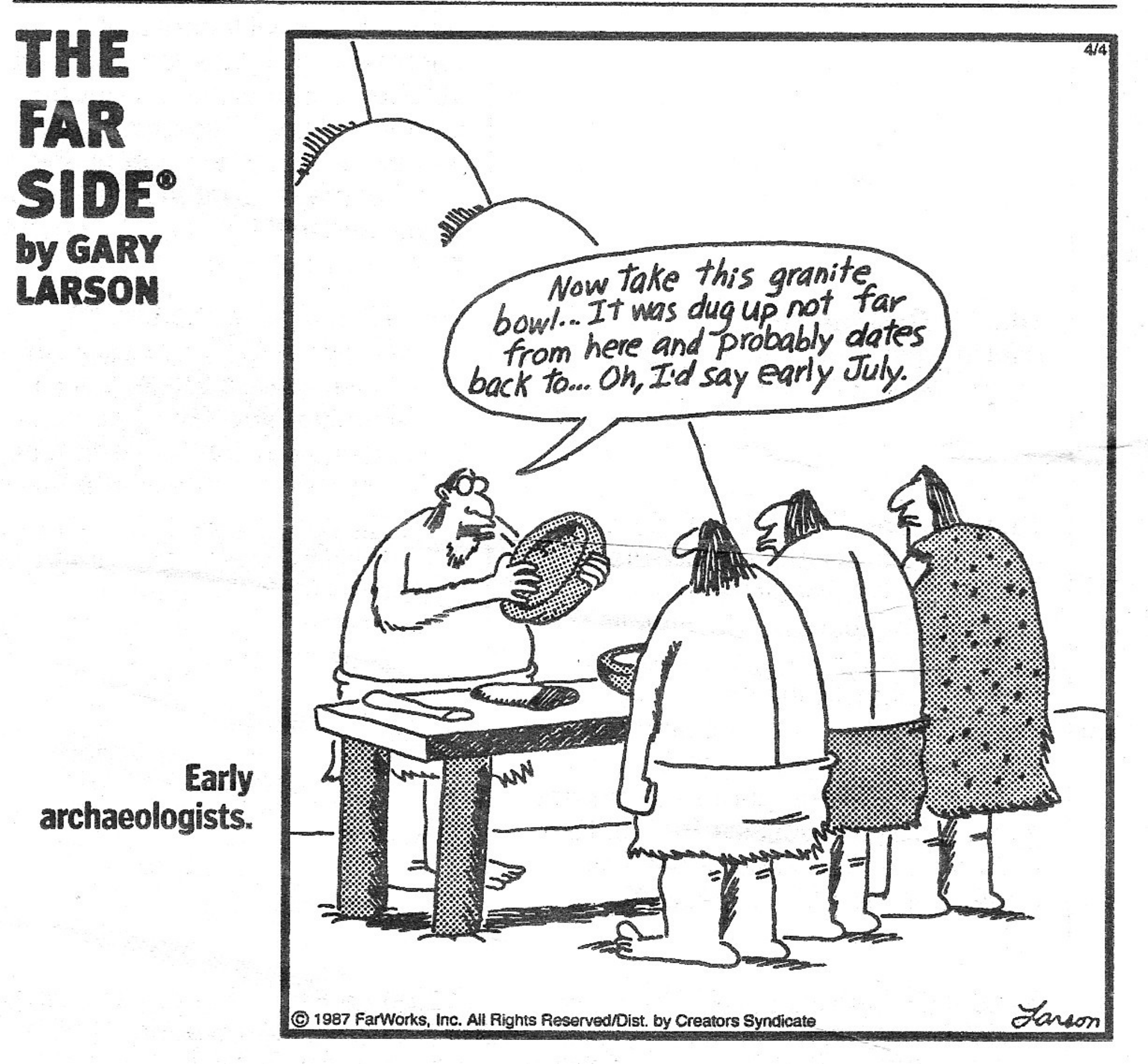 Credit: Gary Larson (The Far Side)

In Britain and Scotland, however, the idea of the study of the past developed, almost from one man, John Leland. Leland (1503 – 1552) studied at Cambrige, and was soon afterwards entrusted by Henry VIII to search for 'interesting or unusual books' in the libraries of all the religious houses of Britain. This quest for curiosities may have sparked off his future investigations, which were broadened to incorporate topography and antiquaries - i.e. ancient monuments - in a series of notebooks which became known as 'Itineraries'. In one, he remarks, quite wonderfully:

Which, if you ask me, seems very wise and just about sums up the sense of wonder only acquired when you visit an archaeological site for the first time! Indeed, Leland would make note of ancient sites and monuments, remarking on Saxon and Roman developments - and objects - at a number of towns and villages. He even got his hands dirty, pulling stones from an ancient wall at Burrough Hill to understand whether they were mortared or not: the significance here is that the account of these walls are sometimes regarded as the earliest archaeological field report! 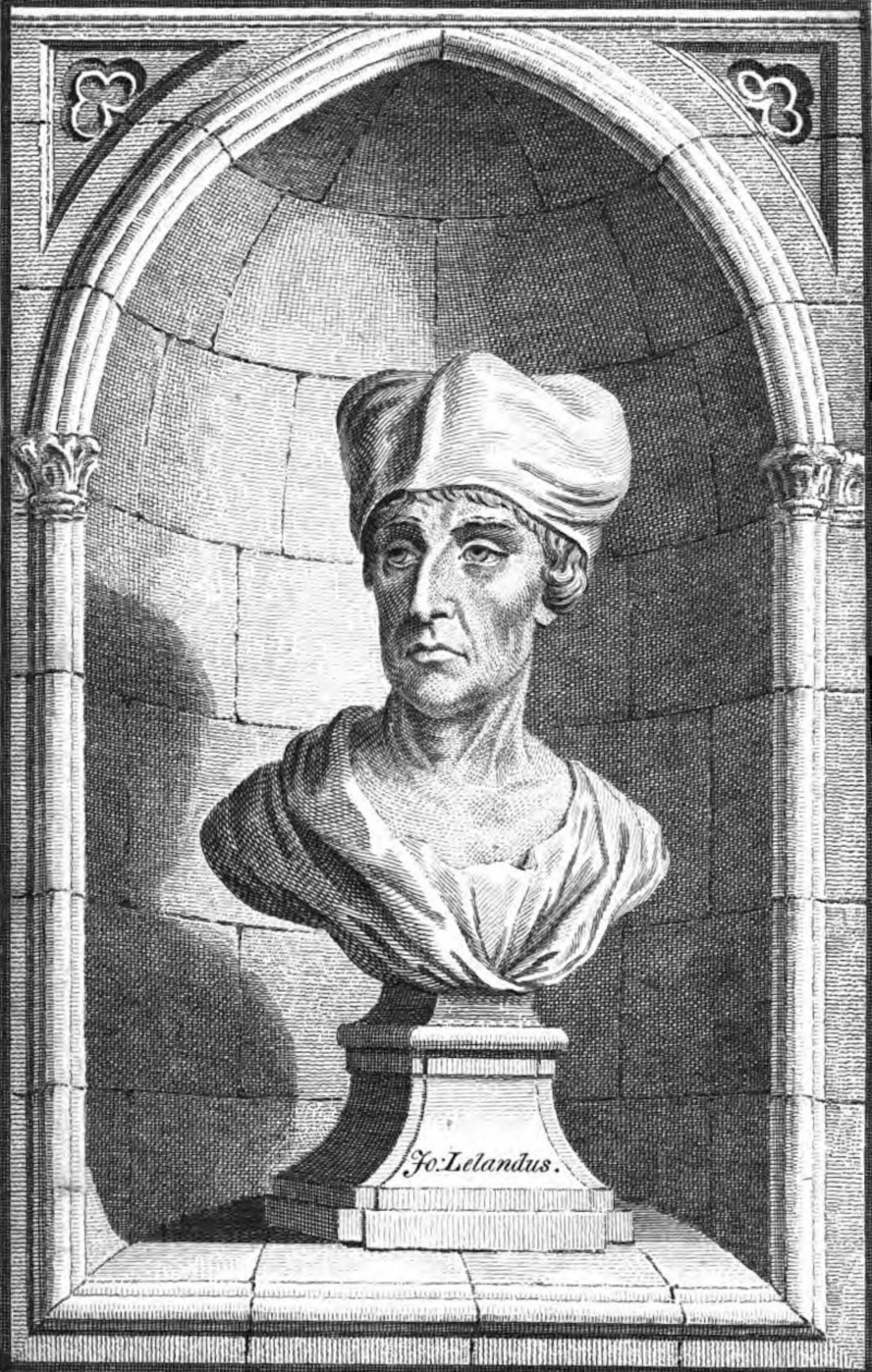 But... why? Why did that happen? Well, that's maybe a little much to discuss in this post: but recording, analysing, cataloguing - it's all to do with making sense of our world, it's a natural thing to want to accomplish. And, as Europe embraced Renaissance ideas and practices, a greater understanding of the past was desired. It's as natural as wanting to know what that bird was, what star that is, where the HELL DID I PUT MY KEYS GOD THEY WERE HERE A SECOND AGO and what's over that hill.

Antiquarianism developed further in the 19th and 20th centuries, and by this point began to delineate from 'history'; antiquaries taking more of an interest in the material world (whether this was documents, monuments or artefacts), with 'cabinets of curiosities' springing up across Europe: forerunners to museums, stuffed to the gunnels with anything weird and wonderful, and which would showcase the 'worldliness' and sophistication of their owner. Often these objects were ill-gotten. Sometimes they were VERY ill-gotten. Some of it was probably gotten.

Alongside these collections of old stuff was another similar collection - this time of old stuffy (and usually wealthy) white men; several Societies of Antiquaries, organisations who sought to advance and promote the learning and research into the past were formulated in the 18th and 19th centuries, including the Society of Antiquaries of London (1707) and the Society of Antiquaries of Scotland (1780). They are now, however, much more diverse and inclusive, reflecting the way in which our collective study of the past has developed!

These men were responsible for exploring and excavating ancient sites. However, their understanding of context and the important of recording meant that digging often led to destruction: this was a clandestine form of archaeology, a practice in its infancy. Wall-chasing and cries of "OOH SHINEH GOLD!" were all too common. 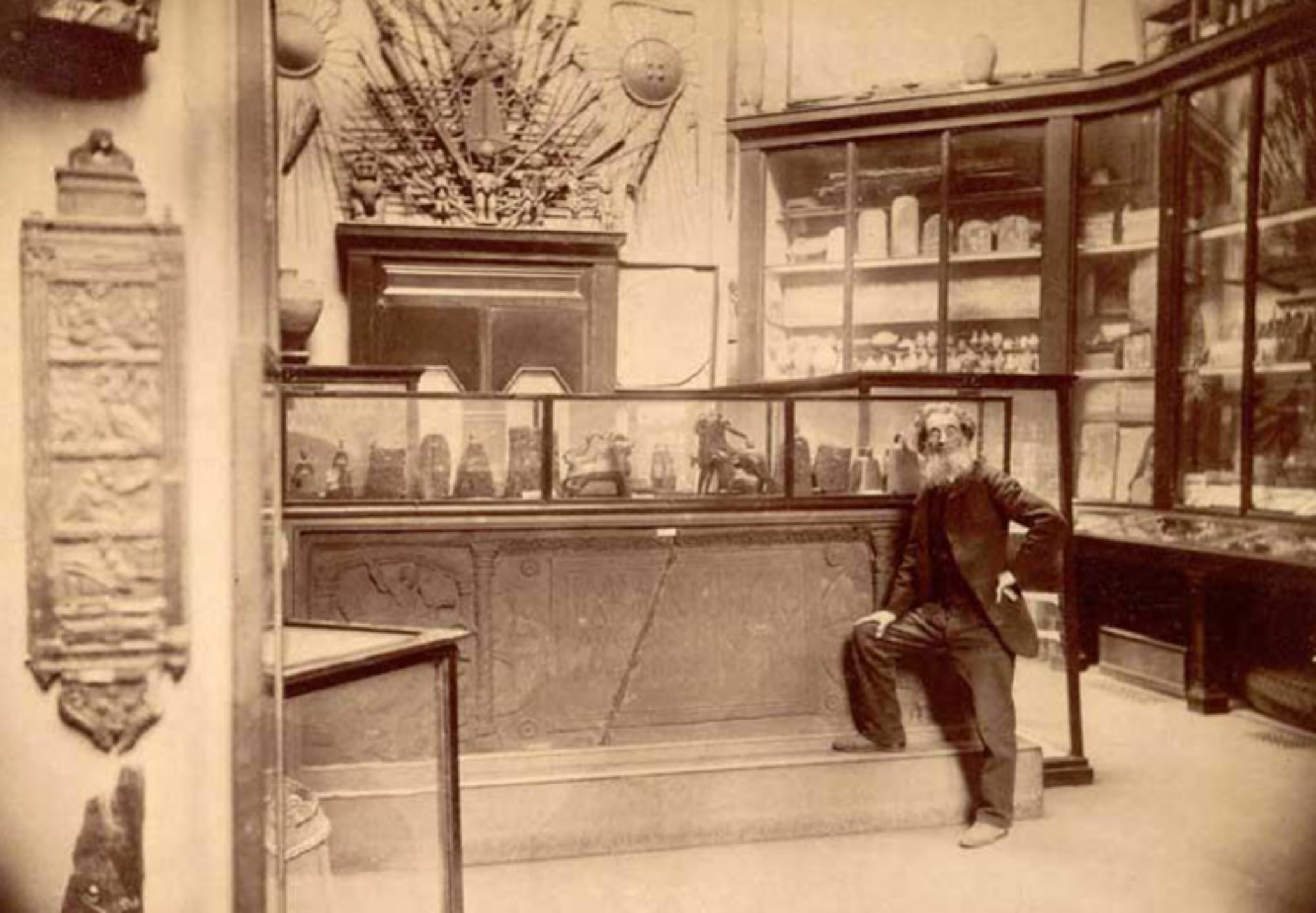 Antiquarian Joseph Anderson, who will be discussed at a later date, posing in the former Society of Antiquaries of Scotland building on Queen Street, Edinburgh.

Antiquarianism as a study is now witheringly viewed, and associated with a lack of contextual understanding for the past - but from this study sprung forth our modern study of our material past: rigorous archaeological techniques and recording methods which enable a more robust and exact understanding of... well, just about everything that came to be.

And that understanding was hard-earned through the efforts of men (and women!) whose wonder and curiosity drove them onwards (and underground). I think, really, in this case, it is only fitting to end this introduction with some more wise words: 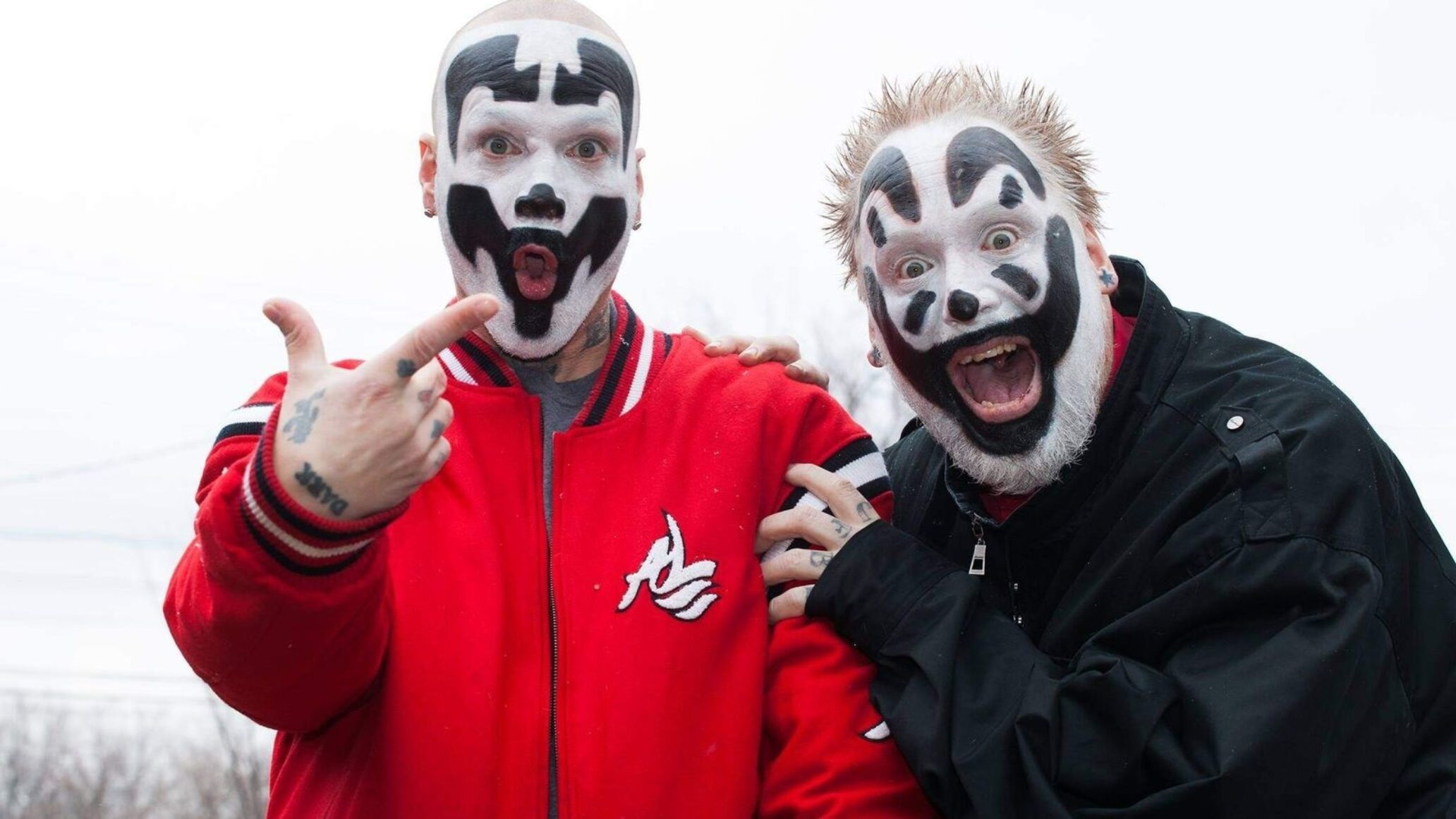