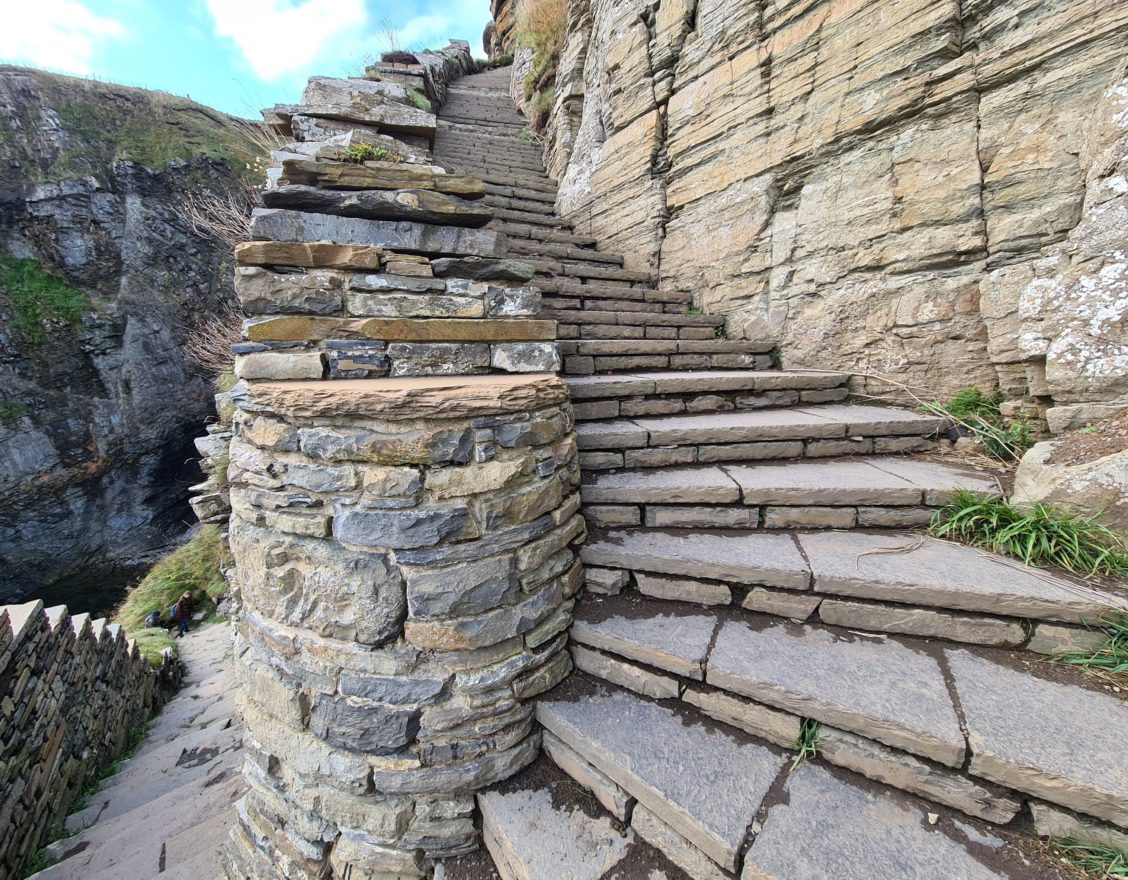 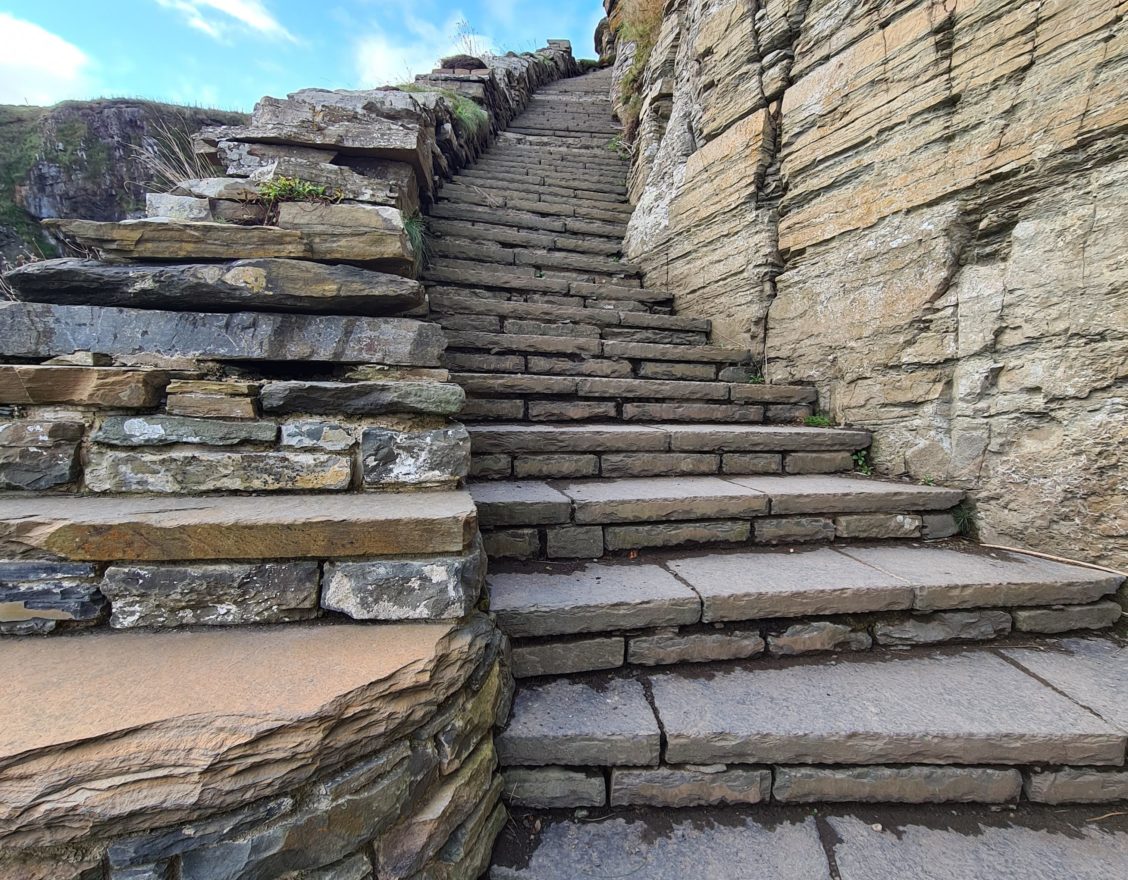 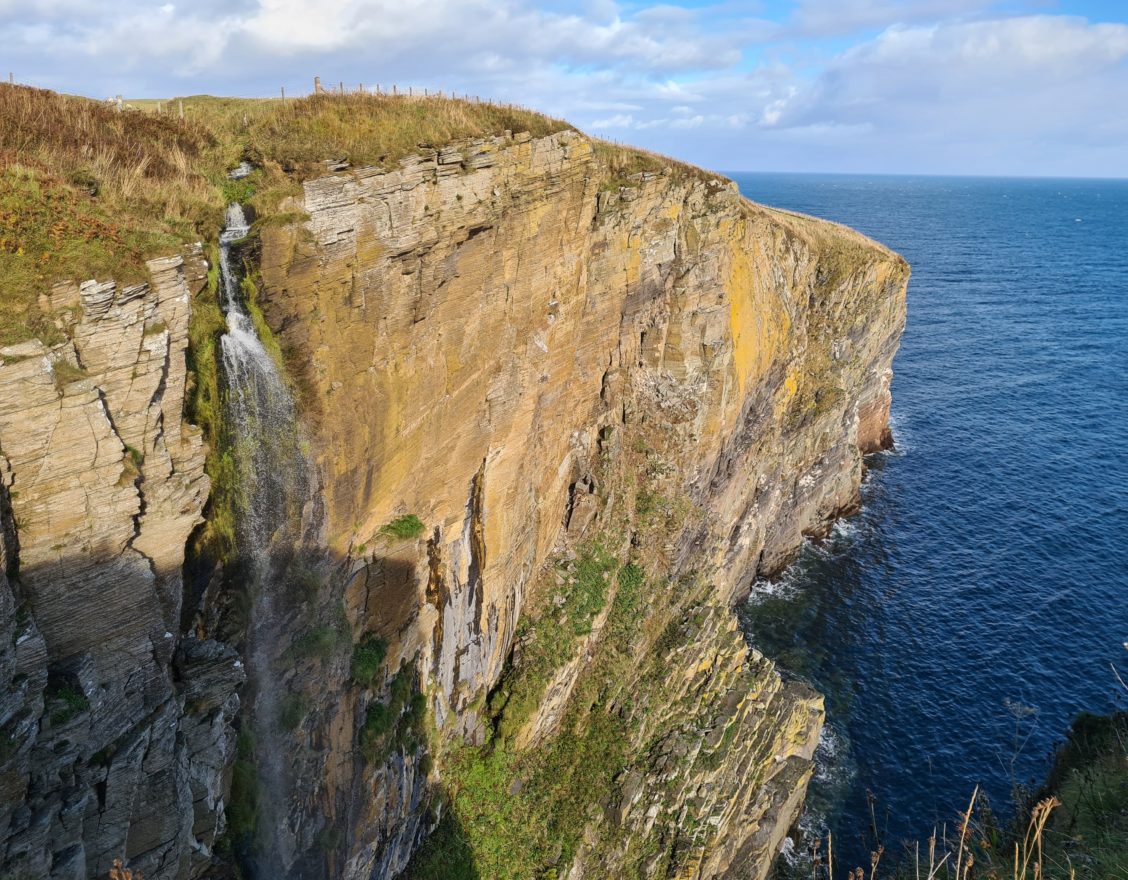 An amazing set of stairs which clamber all the way down the Caithness cliffs to a tiny, once-bustling harbour.

Descending Whaligoe Steps, you may think to yourself - 'How did they do this?'; of course, half-way on the return journey, you may think 'Why did I do this!'

This incredible flight of stairs, almost hewn into the 76 metre-high rocks themselves, are a unique and incredible testament to the herring industry of the 19th century in Scotland. At this time, the northern coasts of Caithness became a hive of activity as harbours opened up to deal with the demand of herring - a delicacy in Europe - swelled like schools of fish under the oceans: at its peak, the Scottish herring fishery exported 2.5 million salted herring a year!

The nearby town of Wick prospered under these conditions, located at just the right place to act as a port for this herring industry (its tale is told in the excellent Wick Heritage Museum), but with only so many boats able to sail in and out of the harbour, every nook and crevice of Caithness was exploited for the industry; ports and harbours popped up across the coastline: Whaligoe was just one of these impossibly-situated harbours. Indeed, while prospecting sites for the British Fishing Society in 1786, Thomas Telford, the famous engineer, so often undeterred by challenges, declared it to be a 'terrible spot'!

The harbour and steps - in its current form - was probably constructed in 1792, though Thomas Pennant, who visited in 1769, remarked on the use of steps by the locals. These steps were created in order to heave loads of fish up to the top of the cliff, and then on to be sold at market. Imagine carrying a basket-full of fish when you're on your way back up to the top...

There are a number of features to look out for at the steps; including the cooperage (which was, until recently, home to a restaurant) at the top of the steps. At the bottom you will walk out onto a platform know as the 'bink', where boats could be hoisted into place with the help of two winches - both of which can still be seen - and held in place with the help of great hooks, hammered into the cliffs. At its height, Whaligoe supported 24 boats!

Turn around, face the steps, and you'll see a slim recess built into the walls of the steps; this was where a huge pole once stood, from which fishing nets were hung to dry. Small aumbries in this structure were used as paraffin lamp holders. Further along the bink there are the remains of a 'grill'-like feature: this was used to melt tar, to waterproof the boats.

The building at the end of the bink was a salt store: the quicker the herring could be salted, the better, as this helped to preserve the fish for long journeys overseas. Of course, some herring was sold locally, and the 'herring girls' would heave great baskets of fish back up the steps, and then onto Wick, 8 miles away, on foot.

By the 1940s the herring industry declined, replaced by whitefish and shellfish. By the 1970, the last boat to use the harbour, The Windward, was pulled out the water. 200 years of fishing in the most impossible of locationd had finally come to an end.

Fortunately the story of Whaligoe continues to persevere, assisted by a number of volunteers who continue to maintain the steps, and ensuring that visitors are left breathless - in more ways than one!

You can find out more about Whaligoe Steps, as well as other archaeological and historical sites, on Canmore, Scotland’s historic environment record.

Billy Connolly visted the steps in 1994 as part of his World Tour of Scotland; his appearance is immortalised in a huge mural in Glasgow!