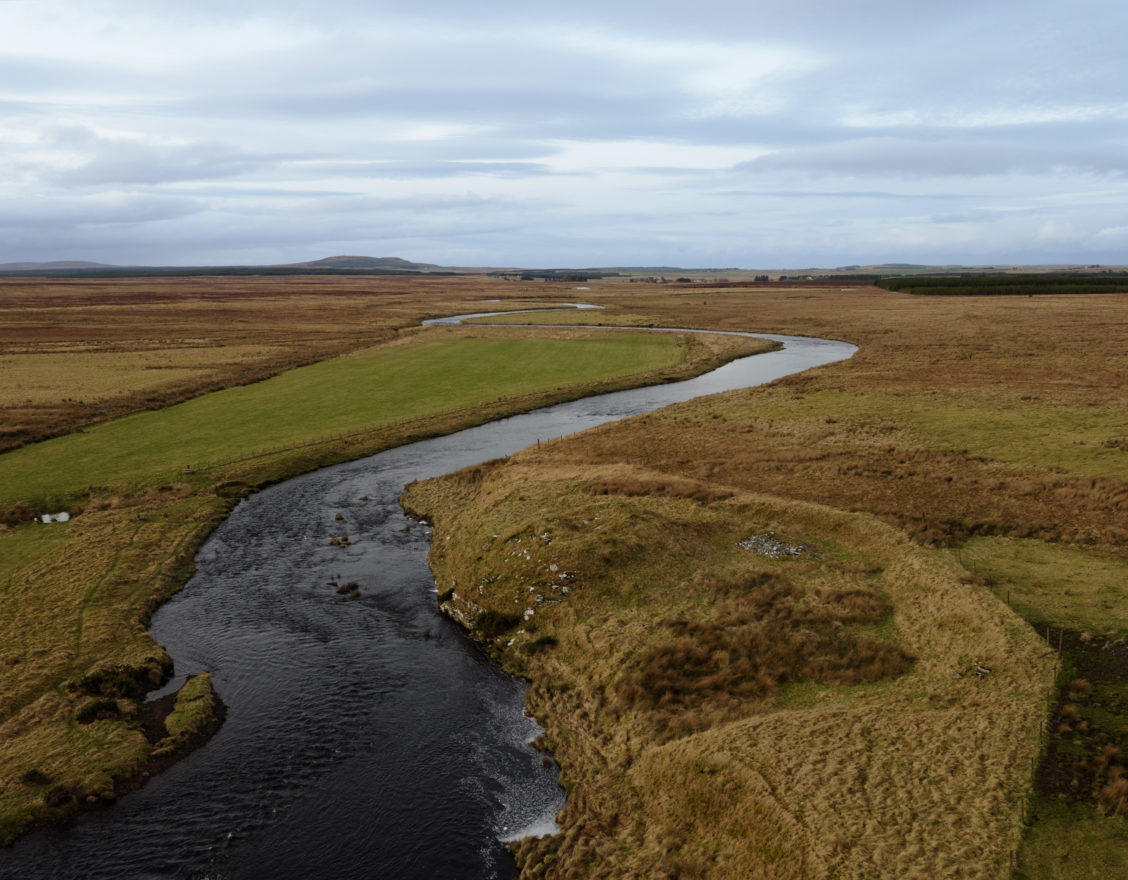 One of the most remote brochs in Caithness, this unexcavated broch on the bank of the River Thurso may not be the most spectacular, but what it lacks in visible archaeology it makes up for in dramatic views.

Westerdale Mill and waterfalls are perhaps some of the most photographed scenes in Caithness – photographers will enjoy the sight of the River Thurso tumbling down under the stone bridge and over a short series of waterfalls, with the iconic mill behind. It seems that the popularity of this area wasn’t lost on our iron age ancestors either: Westerdale has the highest concentration of brochs in Scotland, with six sites clustered along its riverbanks. Two of these brochs are visible as unexcavated grassy mounds to the north of the waterfall.

The trail to Tulach Mor broch begins at the car park beside the building on the east of the bridge. Skirting along the riverbank – with Morven and Scaraben visible in the distance across the expansive ‘Flow Country’ – the first broch you will encounter is named Cairn Merk. A style of defence unique to Westerdale is apparent in the ditch, or moat, surrounding the broch. This deep trench is crossed by a causeway leading to the remains of the doorway, and while the broch itself is filled with rubble, the size and scale of this ancient site is apparent.

Continuing along the path, you may be lucky enough to glimpse the otters that have made their home in this quiet stretch of the river. Herons can also be spotted fishing amongst the rocks. The path soon disappears, but the rest of the way to Tulach Mor broch is along the riverbank – this can be boggy underfoot, but is worth the effort for the view it gives of Tulach Mor as you approach.

The name Tulach Mor derives from the Gaelic tulach (‘mound’ or ‘hillock’) and mor (‘big’). Big mound – aptly named! Generally, where somewhere includes mor in its name, there will be a nearby place that includes beag (‘small’): this area is no exception, with the faint remains of Tulach Beag broch a few yards along the riverbank, which was heavily robbed to build the stone dykes nearby.

Tulach Mor broch is situated on the riverbank by a bend in the river. It was once remarked by eminent archaeologists that the site would have made a great excavation, given that it has never been quarried for its stone or disturbed by antiquarian curiosity. Like Cairn Merk, this broch also has a moat or embankment that appears to have been connected to the river below. The broch itself is an unremarkable grassy mound, rising several meters from the river – perhaps hinting at the original height of this monument in its heyday.

Return to the car park by the same route.

You can find out more about the Tulach Mor Broch, as well as other archaeological and historical sites, on Canmore, Scotland’s historic environment record.

The Spital windfarm not far from the broch was one of the first commercial windfarms in Scotland – showing that Caithness is still at the forefront of pioneering the means of energy production.