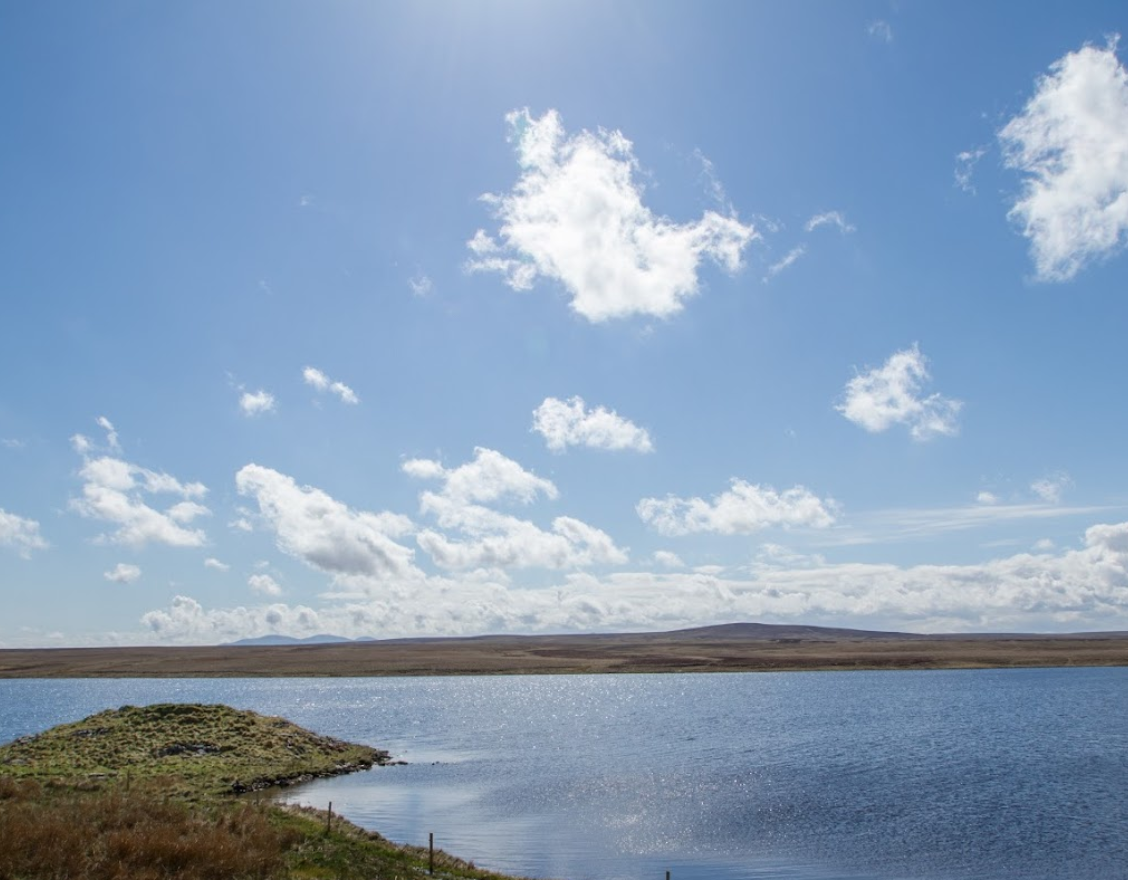 A broch with fantastic views – and an even more fantastic medieval tale! Rangag Broch can be found on the shores of Loch Rangag, a small loch located about 8 miles north of Latheron. There is a small space for parking which has been recently created by The Peatland Partnership’s ‘Flows to the Future’ project, where you can enjoy a view of this broch and hills and peatlands of Caithness in the distance.

Given its proximity to the loch, this Iron Age broch may have once been a crannog, though until it is investigated we will never know for sure. However, a trip to Loch Rangag is to lose yourself in stories of tempestuous knights and magical swords in the Land of Doubt! Part of this tale is recounted on the plaque at Rangag, which also describes the environment and view of the ‘Flow Country’, and the beautiful views of Morven, Caithness’ highest point, in the distance. But, for a bit more on the story, we have summarised it below:

It is thought the tale of ‘Greysteil’, also known as the tale of ‘Ser Eger and Ser Grime’ may have been based here at this ancient structure. The tale was popular in the 16th century, but made its first appearance on the 17th April 1497, when the Lord Treasurer noted that there was a payment ‘to twa fithalaris [fiddlers] that sang Greysteil to the king, ixs (James IV)’.

The tale, which may have roots in a much older Celtic story, recounts how a knight, Ser Eger, challenges a giant red-gold knight named Greysteil, who was undefeated in combat, to gain the affections of his love, Winglaine. Greysteil defeats Eger, and cut off his pinkie as punishment for challenging him. On his way home he is assisted by a magical female physician Loosepain, who patches him up – yet these are only temporary, and on his return he reverts to his battered and bruised state.

When Eger returns, he recounts his tale to his knight friend Ser Grime, who vows to take vengeance on Greysteil, and will do so disguised as Eger, so that Winglaine will believe he was never defeated. He takes with him a magical sword called ‘Egeking’, supposedly crafted in the Middle East, before encountering Loosepain, with whom he falls in love. Though Loosepain is initially angered – after removing one his gloves to discover his fingers are all present! – she recounts her own tale of woe involving Greysteil, after he killed her husband.

Loosepaine imparts some crucial knowledge on how to defeat Greysteil (that his power wanes between noon and midnight), he promises to avenge her husband’s death also. He confronts Greysteil, and defeats him, cutting off his hand as retribution for Eger’s pinkie. When he returns to Loosepaine, he places his hand in a coffer, which magically rejuvenates Eger’s finger; Loosepaine and Grime admit their love for one another and are betrothed.

When he returns, he slips into his chamber undiscovered and gives his ‘tokens of victory’ to Eger, who presents them to Winglaine and the court – there is much rejoicing and the pair are married.

There is another Grey Steil associated with this broch, as recounted by the Caithness historian J.T. Calder, which shares some similarities and the two may in some way be related. Grey Steil was a notorious ‘freebooter’ and feared warrior who terrorised the region with his ‘predatory missions to steal’.

One day this Grey Steil murdered a young lad hunting to the west of the loch. His sister was due to be married to the Laird of Dunn; when the Laird heard this, he vowed to take revenge. While travelling to do battle with Grey Steil, he chanced upon the dwelling of a poor old lady. In this house was a beautiful and ancient sword, supposedly crafted in Palestine, gifted to her late husband by a Polish Jew who he had saved from a beating in Frankfurt. After much pleading, the old woman relented and gave the Laird the sword.

On the slopes of Ben-a-Chielt, to the east of Rangag, the Laird and Grey Steil fought. The Laird was too skilful for Grey Steil, and killed him. He then raised a band of followers, and raised the broch to the ground. After this he returned home and married his sweetheart – and looked after the poor old lady for the rest of her days.

There is a sad ending though – apparently Grey Steil took with him to his grave the understanding of how to brew heather ale!

You can find out more about Rangag Broch, as well as other archaeological and historical sites, on Canmore, Scotland’s historic environment record.

On the slopes of Ben-a-Chielt an ancient carved stone ball – also known as a ‘petrosphere’ – was found.