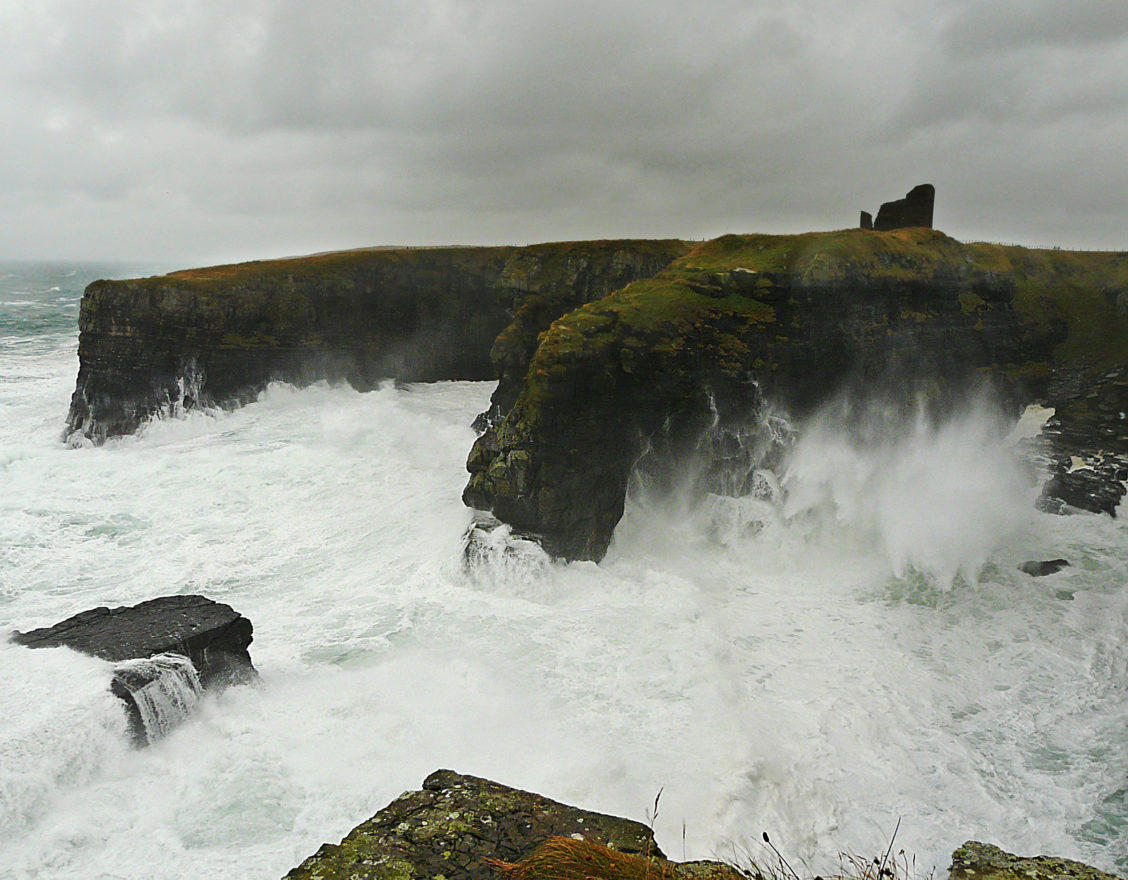 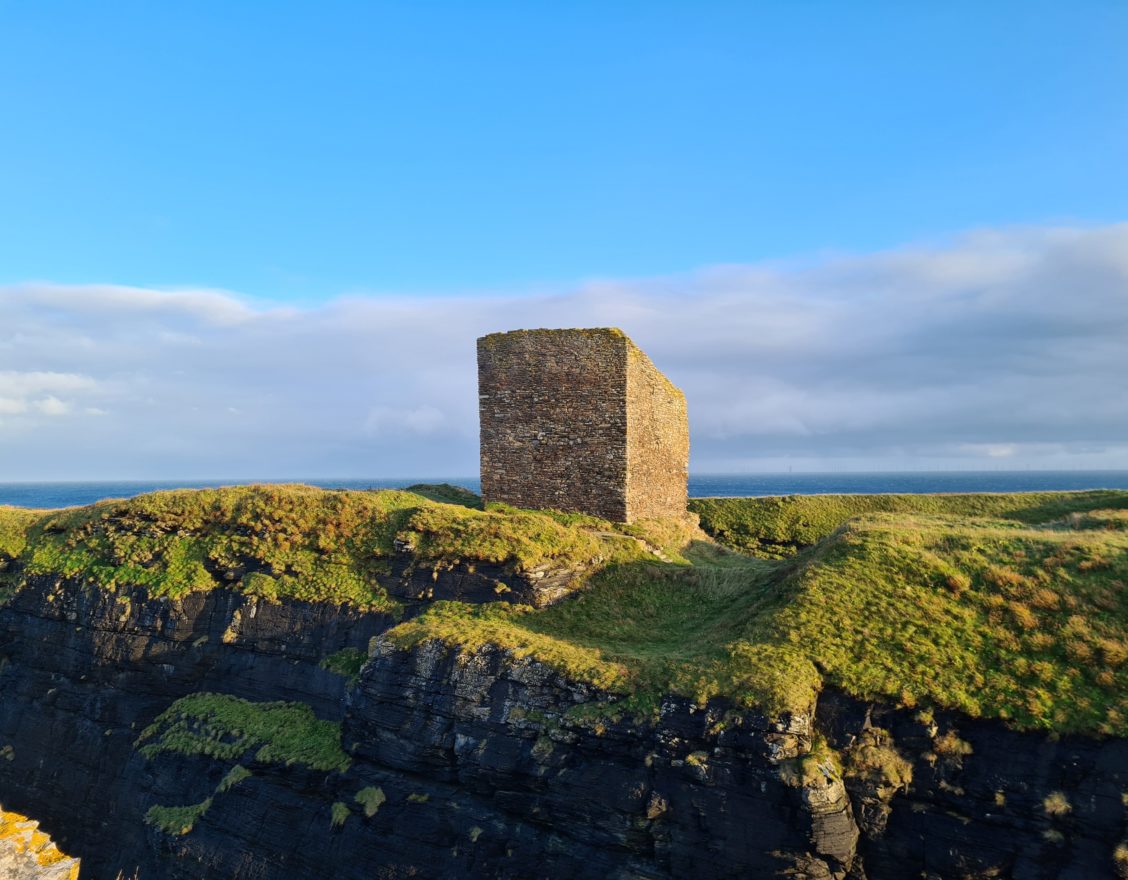 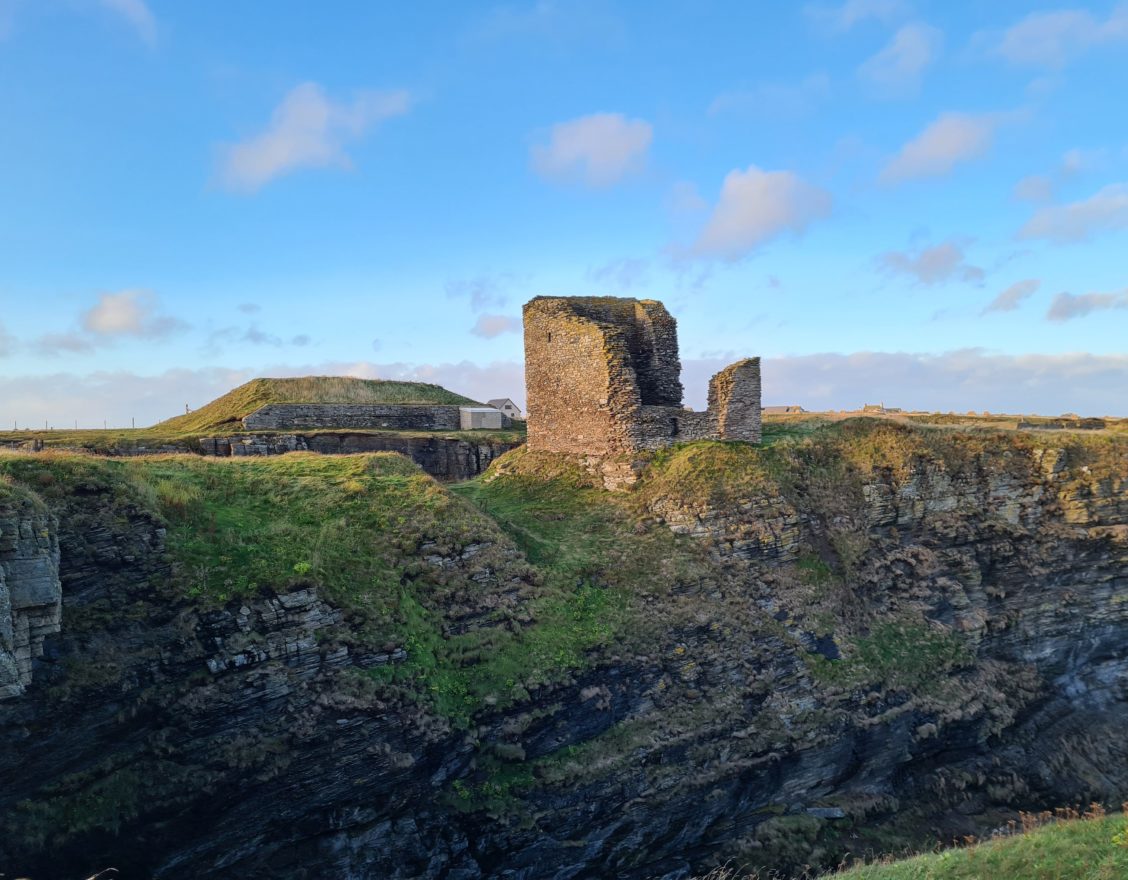 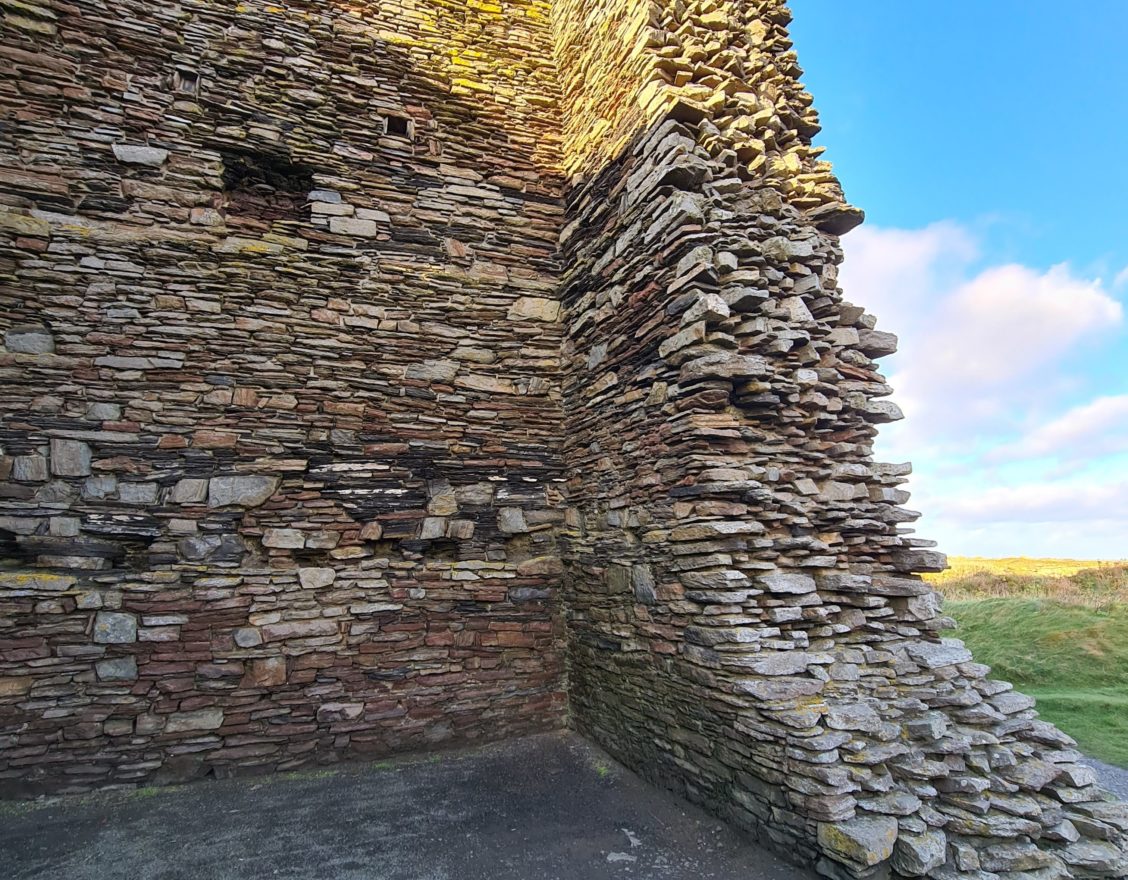 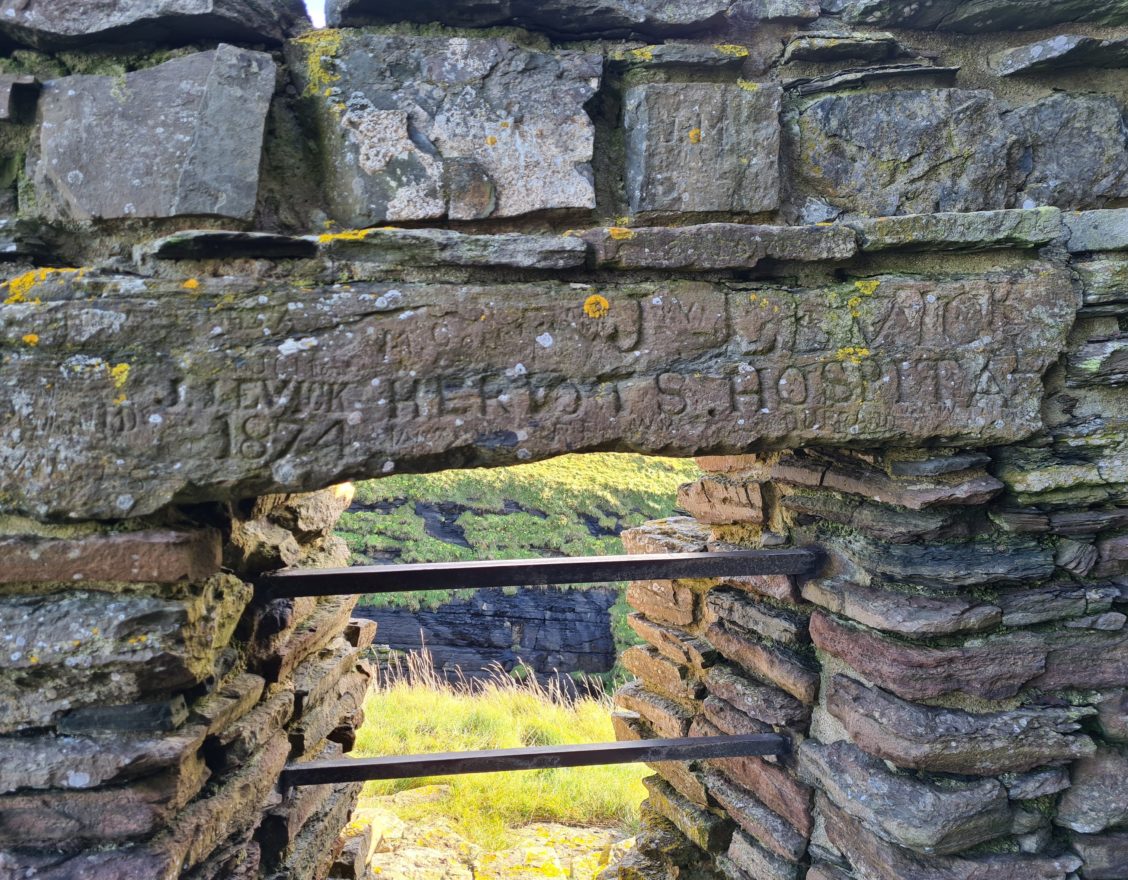 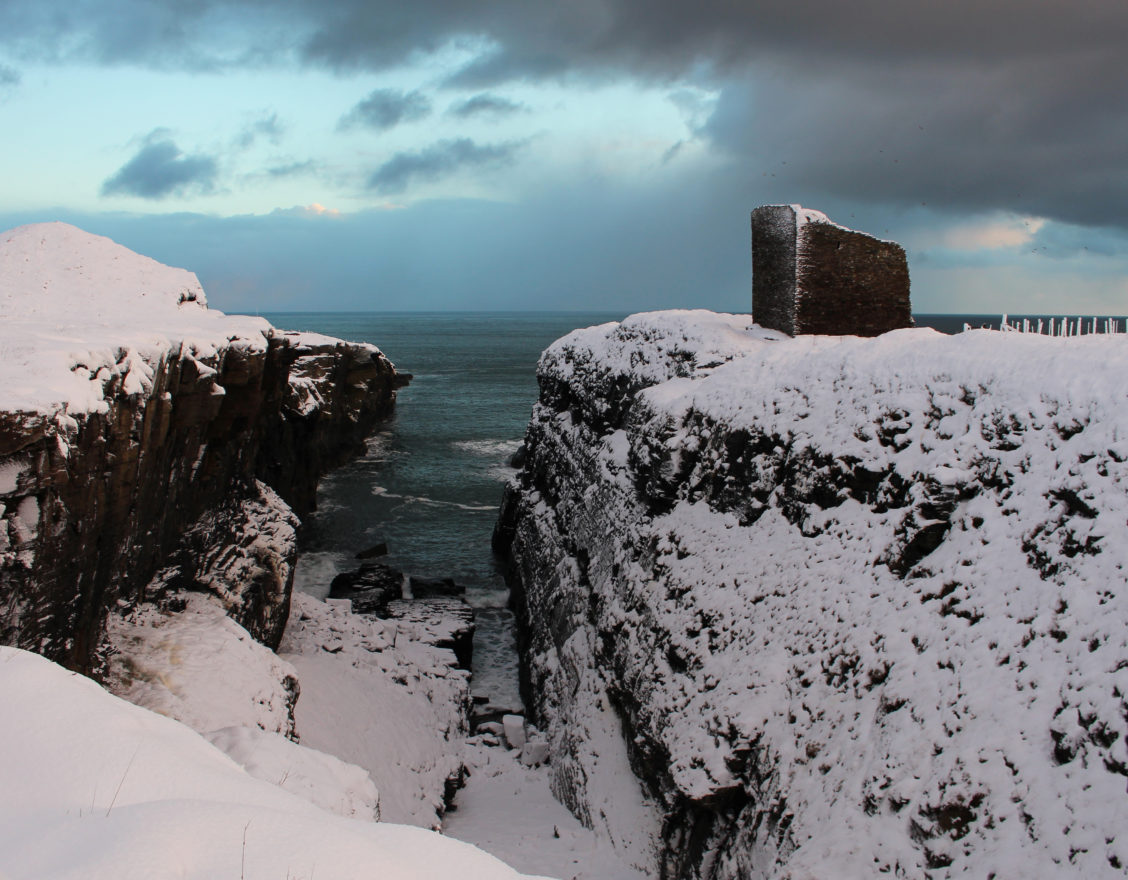 A mighty, stout castle - one of the oldest castles - stands proudly atop the cliffs south of Wick. Though the remains of Old Wick Castle, as it is sometimes called, have been ascribed to the 14th century, it is likely that this castle was built on top of an even older fortification built in the 12th century by Harald Maddadson.

Though the site is likely to have been occupied since the 1100s, the present structure dates to around 200 years later, in the 14th century. The three-storey tower (originally four-storey) is the defining monument in this castle complex; the remains of other structures can be seen behind the tower, but these have never been archaeologically investigated. The seaward side collapsed long ago, and the castle is in an advanced state of ruin, but some features still survive, including narrow window slits, ledges for supporting timber upper floors, and a fireplace on the second floor.

More recently (October 2021), Historic Environment Scotland removed a small segment of timber from the upper floors, to help provide a date for the castle's construction.

It was originally built by the Early Harald Maddadson (c. 1134 – 1206), a man who played an important role in Scottish politics. According to the Orkneyinga Saga, not only did he have run-ins with Sweyn Asleifsson, the 'ultimate Viking', at Lambaborg, but Harald also had a confrontation with William the Lion - the King of Scotland.

Harald had asserted his rule over the area after defeating Harold the Younger at the Battle of Clardon Hill near Thurso in 1198 and went on to fine, imprison and even hang the inhabitants of Thurso who opposed his rule. Bishop John of Caithness tried to plead for mercy but, cruelly, Harald had the Bishop's tongue cut off and his eyes put out!

Upon hearing this, King William sent an army north to keep Harold in line, eventually meeting at Ousdale (known as 'Eysteindal' by the Norse) in 1201, where Harald realised his army was vastly outnumbered by Williams, and sued for peace.

It seems 'Wicked Earl Harald', as he is known in Caithness, never met an end befitting of his nature - he died peacefully in 1206, aged 73.

You can find out more about the Castle of Old Wick, as well as other archaeological and historical sites, on Canmore, Scotland’s historic environment record.

The castle is built upon the Old Man of Wick, a stretch of cliff where a human face can be discerned if you look closely enough!