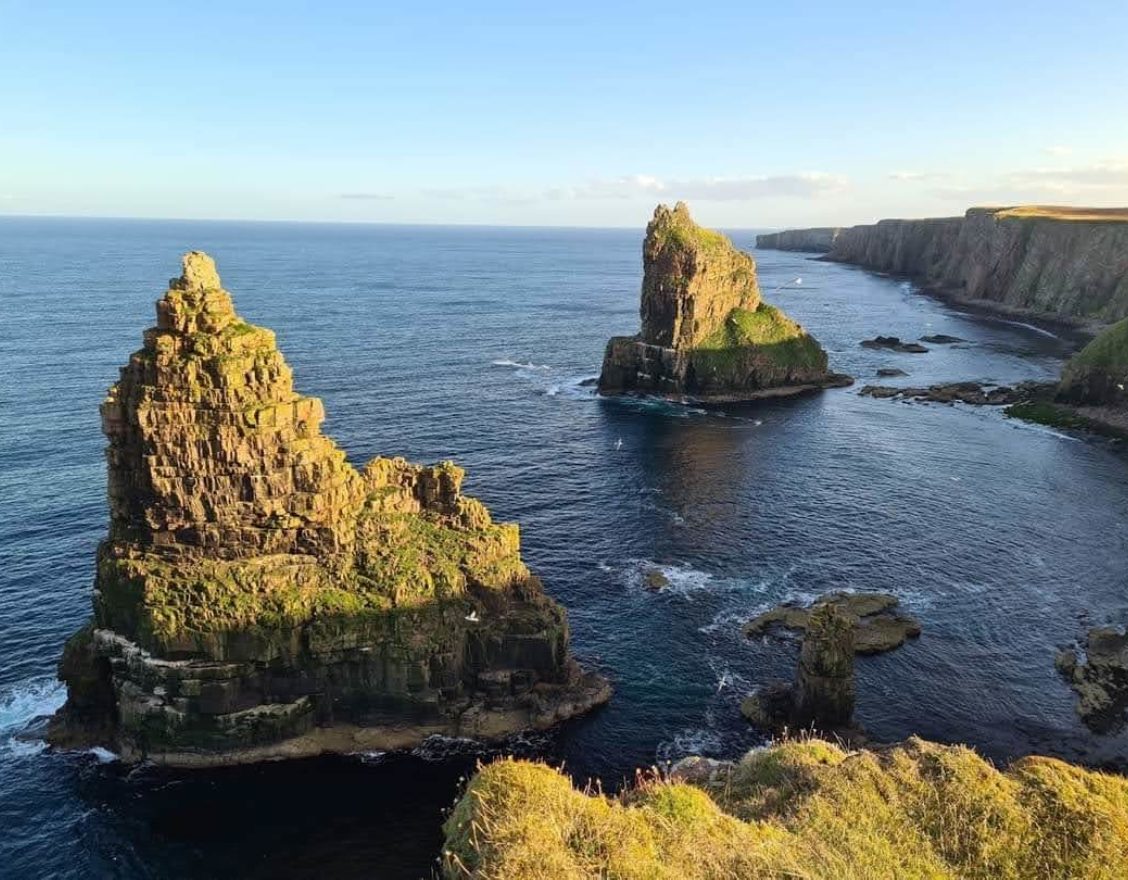 Simply put, one of Caithness' premier attractions! These stone pyramids rise up from the North Sea like great giants, stretching towards the sky, as seabirds swoop and circle overhead. A must-see, and one which lives in the minds of all those who visit for many years after.

The iconic sea stacks at Duncansby guard the western approach to Duncansby Head and John o’ Groats, like poorly hidden wizards, only visible by their hats rising out of the sea. Sea life abounds, from seals to dolphins, and a plethora of sea birds. Bird watchers can enjoy spotting fulmars, kittiwakes, guillemots, razorbills, skua, and even the occasional puffin.

Begin the walk to the stacks from John o’ Groats or from the car park at Duncansby Lighthouse. Built by the Stevenson family in 1924, the lighthouse has helped guide many mariners through the treacherous waters of the Pentland Firth. Well known for strong tides and gale force winds, the Pentland Firth has been the site of many wrecks. The tides are some of the strongest in the world, creating violent and dangerous tidal 'races' - fast moving tides channelled through narrow passages.

Looking past the waters of the Pentland Firth you can see the island of Stroma with its ruined buildings, and Orkney beyond. Putting the lighthouse behind you and ascending gradually along the well-trodden path, you will soon be greeted by the 60-metre high sea stacks, sea birds nesting on the cliffs, and maybe some seals in the coves below!

You will first pass by the Geo of Sclaites, a deep crevice cut into the cliff by the sea. Next is the first stack, still partially attached to the mainland, with an arch in the bottom known as Thirle Door. Two freestanding sea stacks stand majestically beyond, and further beyond this is 'Wife Geo'.

While there is fencing along the steep cliff edges, caution is advised as you walk around the headland.

The stacks were first climbed in 1958!

The term Duncansby is from the Norse, and was known as written 'Dungalsbae'. According to J.T. Calder's Civil and Traditional History of Caithness, "near the top of the promontory stood the ancient fort of Dungalsbae, the earliest stronghold of the Scandinavian Earls of Orkney and Caithness". This may have been a broch!