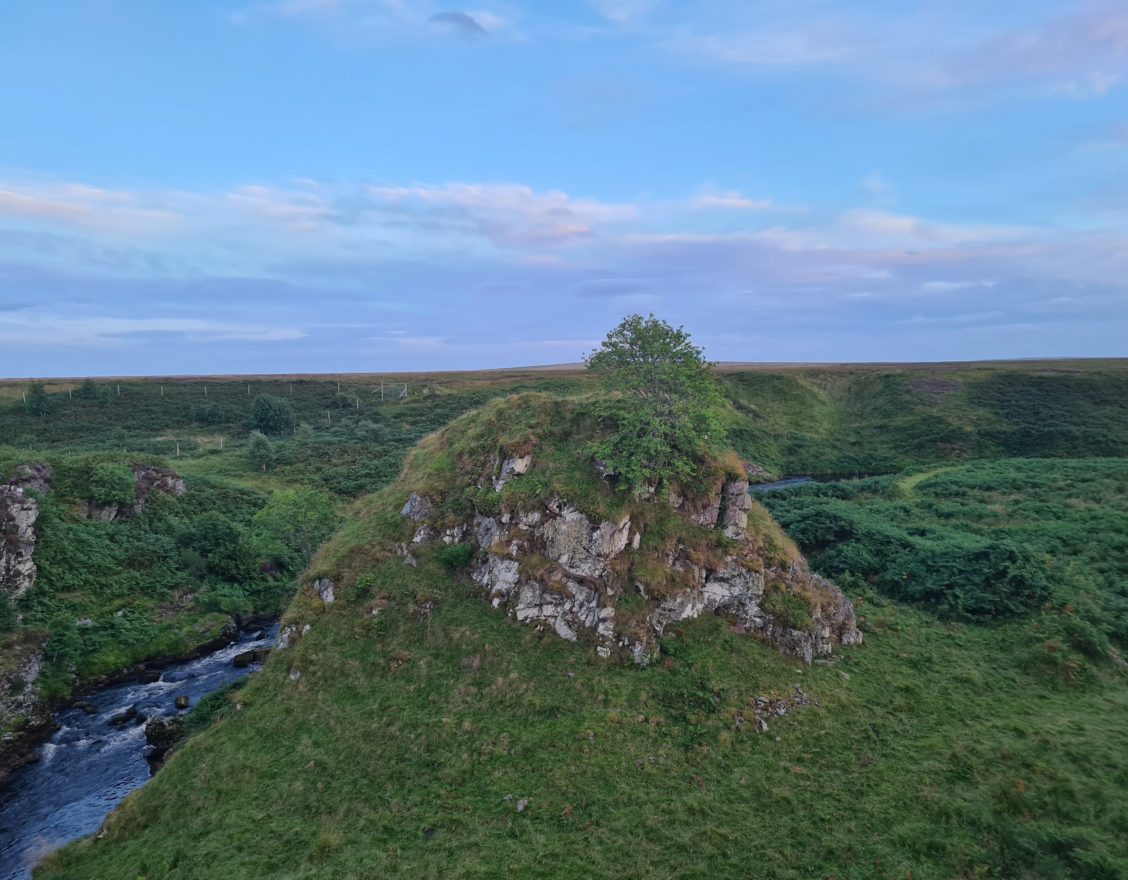 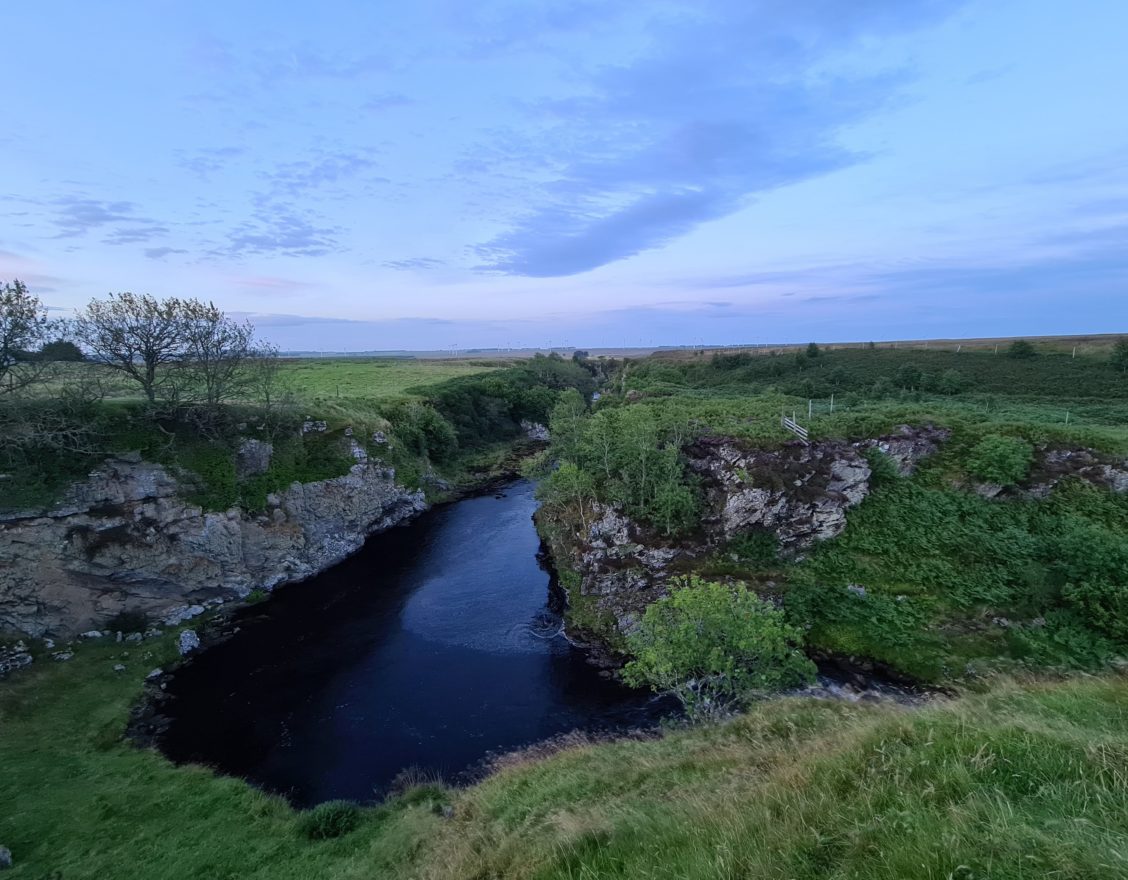 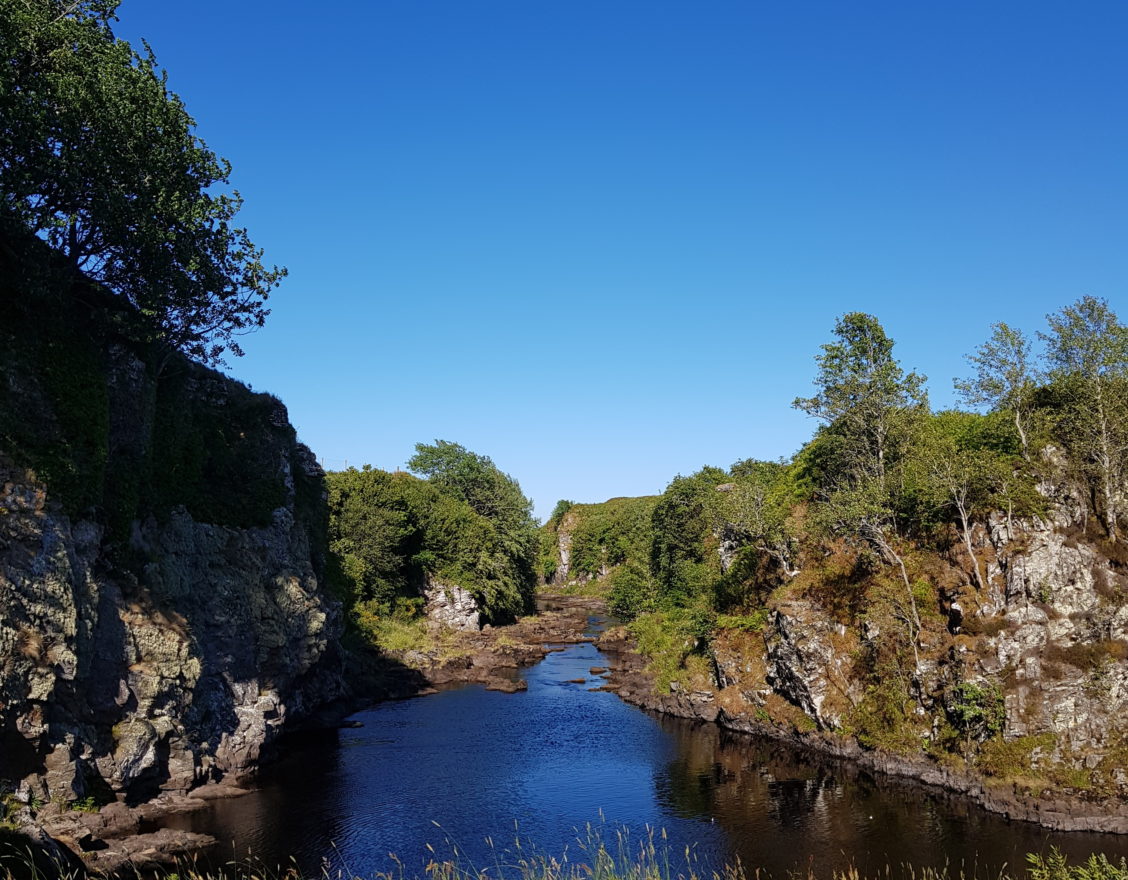 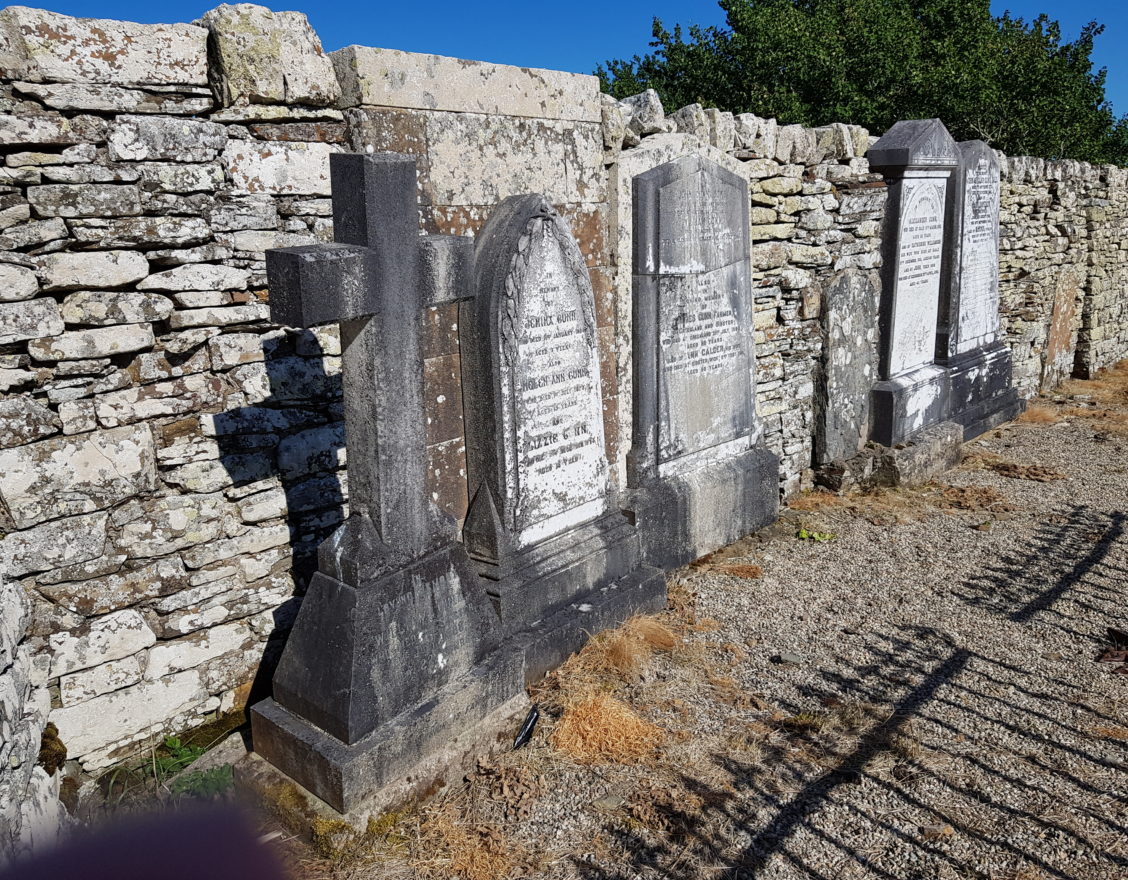 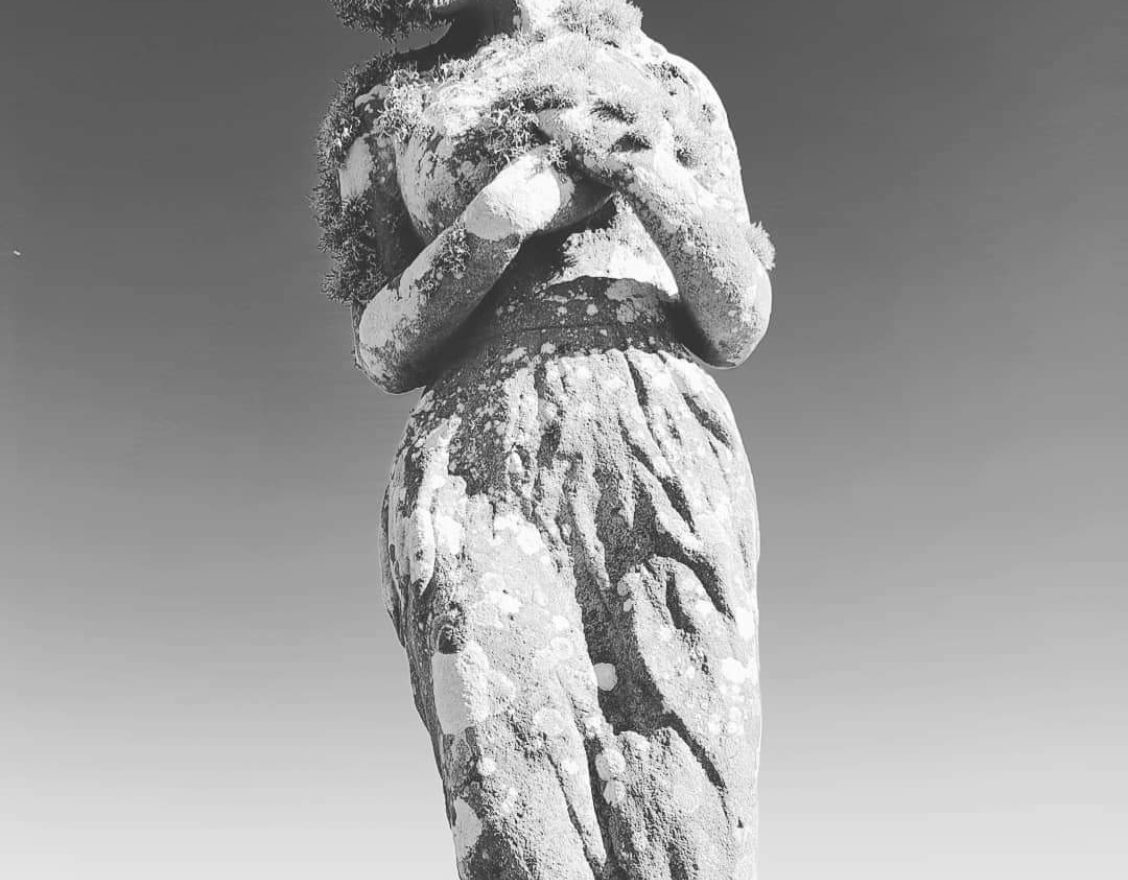 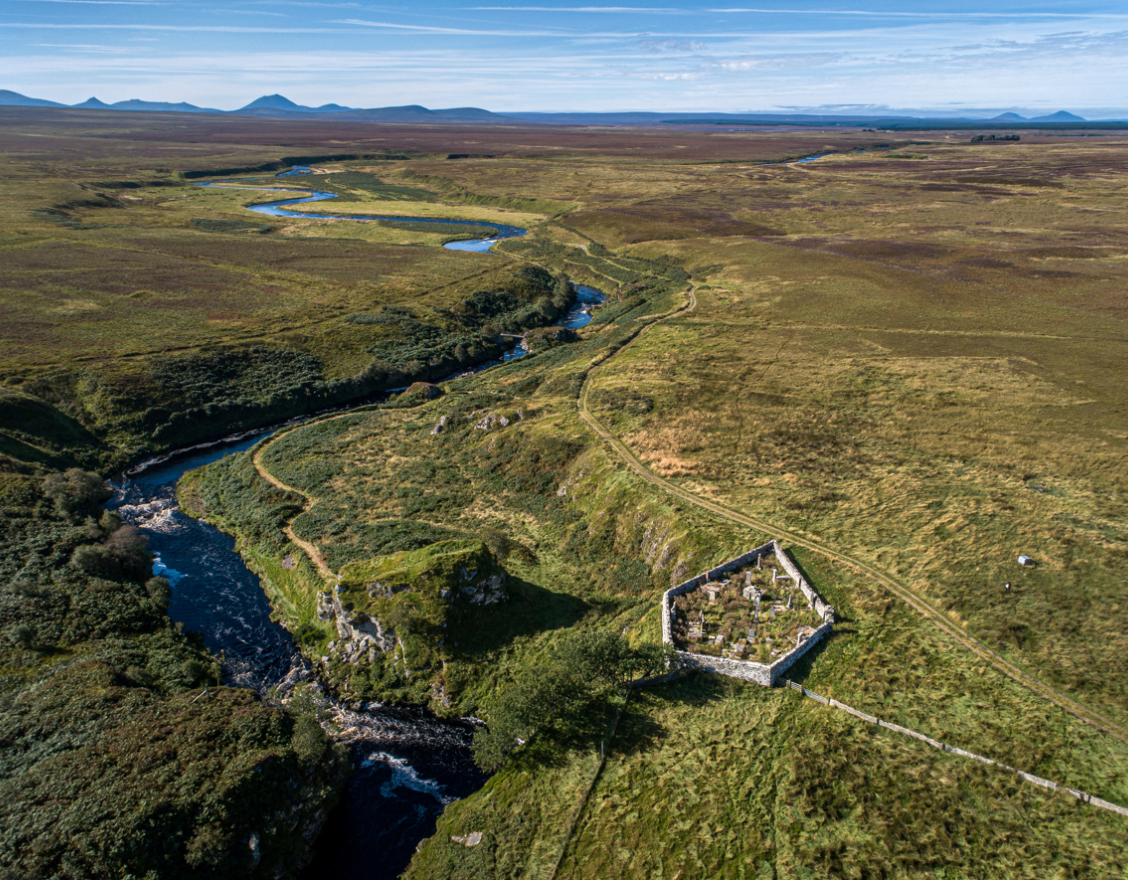 A pot of gold in swirling dark waters, a forlorn and haunting statue, and a medieval castle... Dirlot is a hidden gem for lovers of lore and history!

Dirlot Castle, which can be found near Westerdale in the county’s interior, is a small but intriguing site. Probably built during the 14th century by Reginald de Cheyne (1270-1345), a nobleman, signatory of the Declaration of Arbroath, and, apparently, one of the finest sportsmen in Scotland at the time.

The castle is located within a gorge, atop a volcanic plug, with the River Thurso rushing behind it. A scramble down the gorge, and then up the plug, will help you to understand that this place must have been considered fairly impregnable – and you just have to imagine the giant keep that would have been built on top of the rock here. A fearsome sight for besiegers no doubt; indeed, ‘Dirlot’ may have been derived from the old Scots word ‘Dildermot’ meaning ‘an obstacle’ or ‘great difficulty’!

Dirlot Castle saw plenty of action in its 300 years of service: having been occupied by the Cheynes, the Gunns, the Mackays and the Sutherlands at different stages, it was finally abandoned in 1660. Much of the castle masonry was probably reused in the construction of Dirlot Graveyard just opposite. Here you can find a haunting statue carved by John Nicolson, as well as the grave of Donald Gunn, born in 1827, who fought in the American Civil War (1861-1863).

Local legend has it that behind the castle, in the torrents of Thurso River, lies the bottomless pit named the ‘Devil’s Pool’. It is said that an underwater cavern is guarded by a fierce kelpie – a horse-like creature or spirit in Scottish folklore which inhabits watery courses, seas, and lochs – who watches over a golden treasure within the rocks.

Some say this treasure is the golden armour of Dugald Keith, the leader of the Clan Keith, who was slain in the nearby battle of Dirlot and whose armour was stripped from him and thrown into the pool; others say that a maiden stowed the gold away here after the castle was assaulted. Apparently, divers even attempted to locate the gold within at some point during the last century. Using grapple hooks, they lowered themselves into the cavern – but once they had plunged into the waters they never returned. Well, it’s said they never returned whole, as their organs floated back out…

We may never know the true story. But myths like these are always fun to recount – especially to children – and a visit to Dirlot is to immerse yourself in the history and legends of Caithness!

You can find out more about Dirlot Castle, as well as other archaeological and historical sites, on Canmore, Scotland’s historic environment record.

Dirlot Graveyard is laid out in the shape of an arrowhead – but what could it be pointing at?