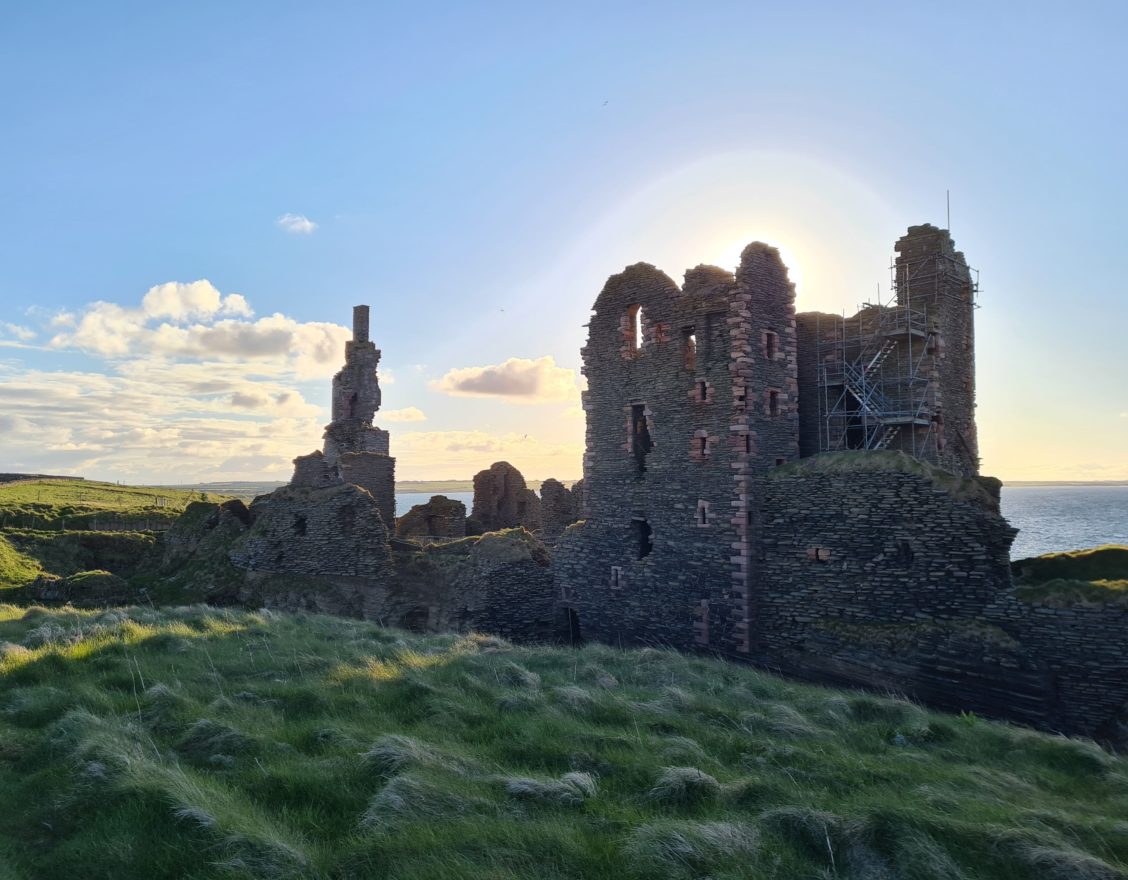 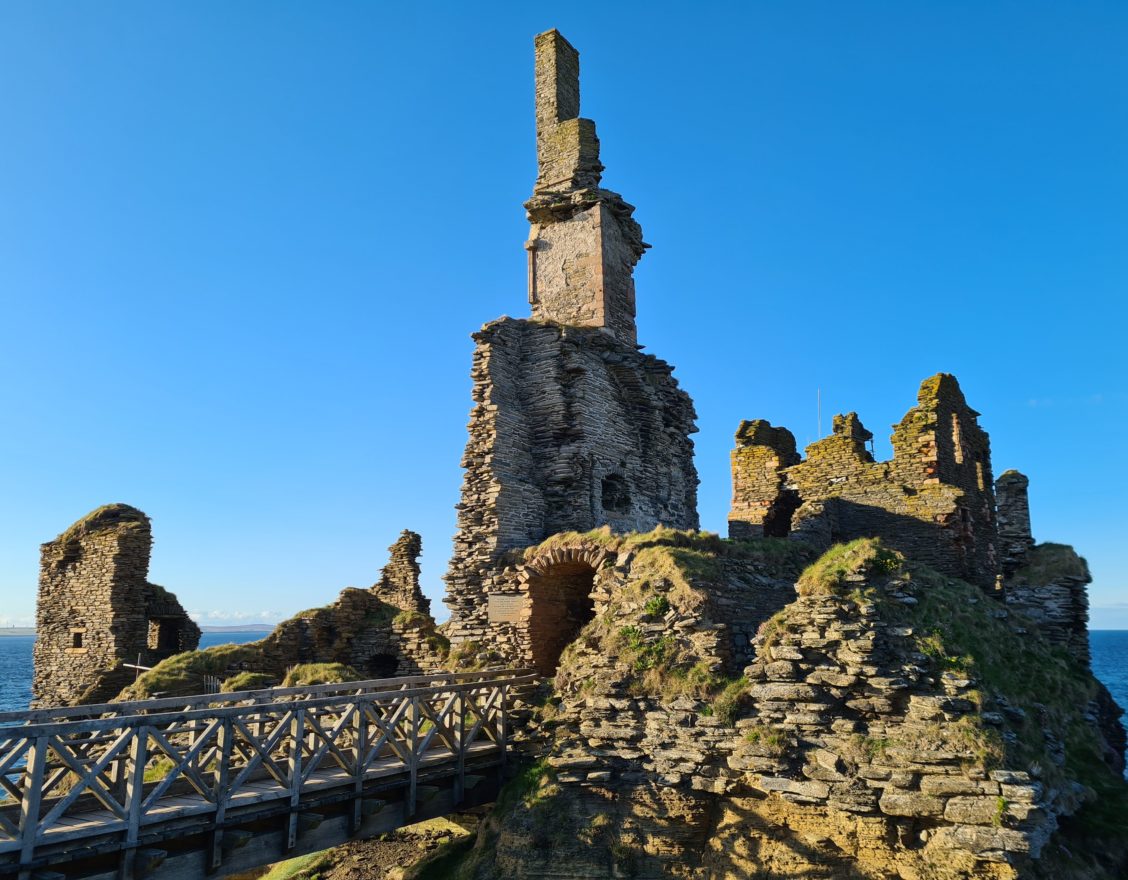 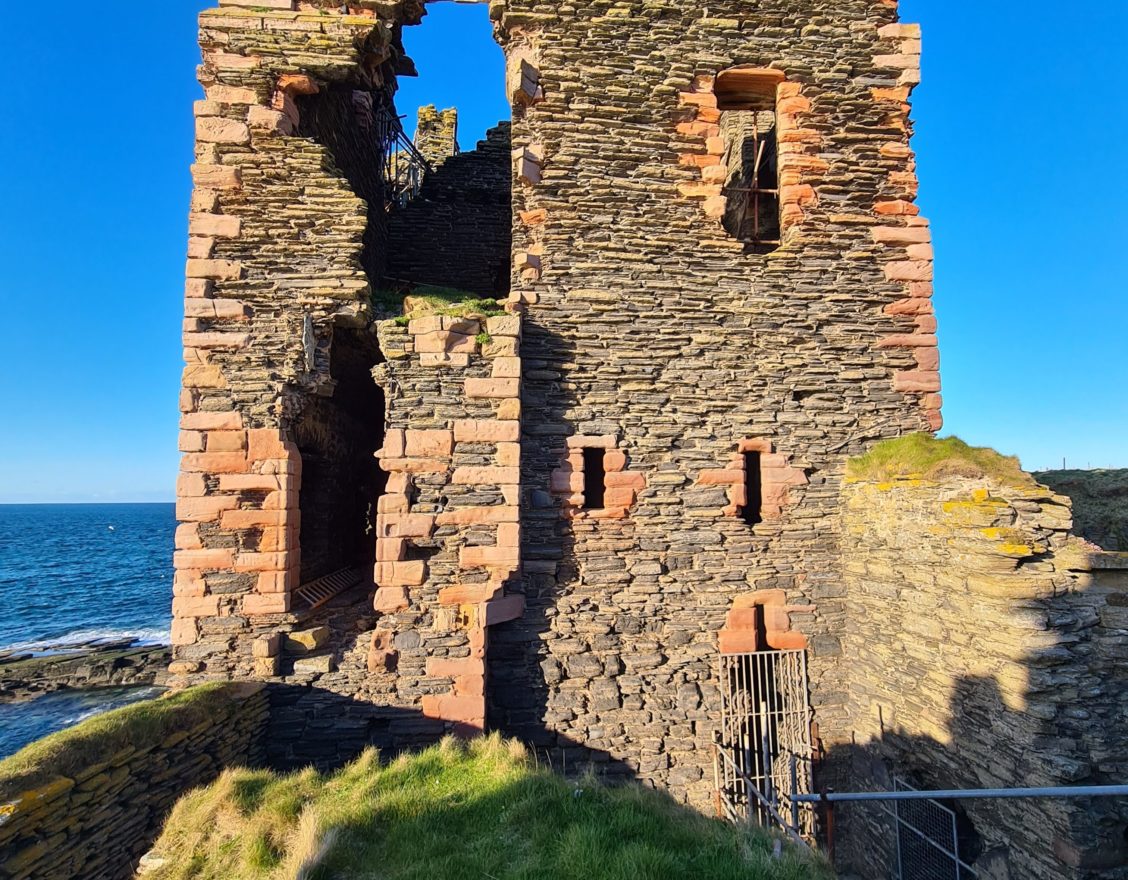 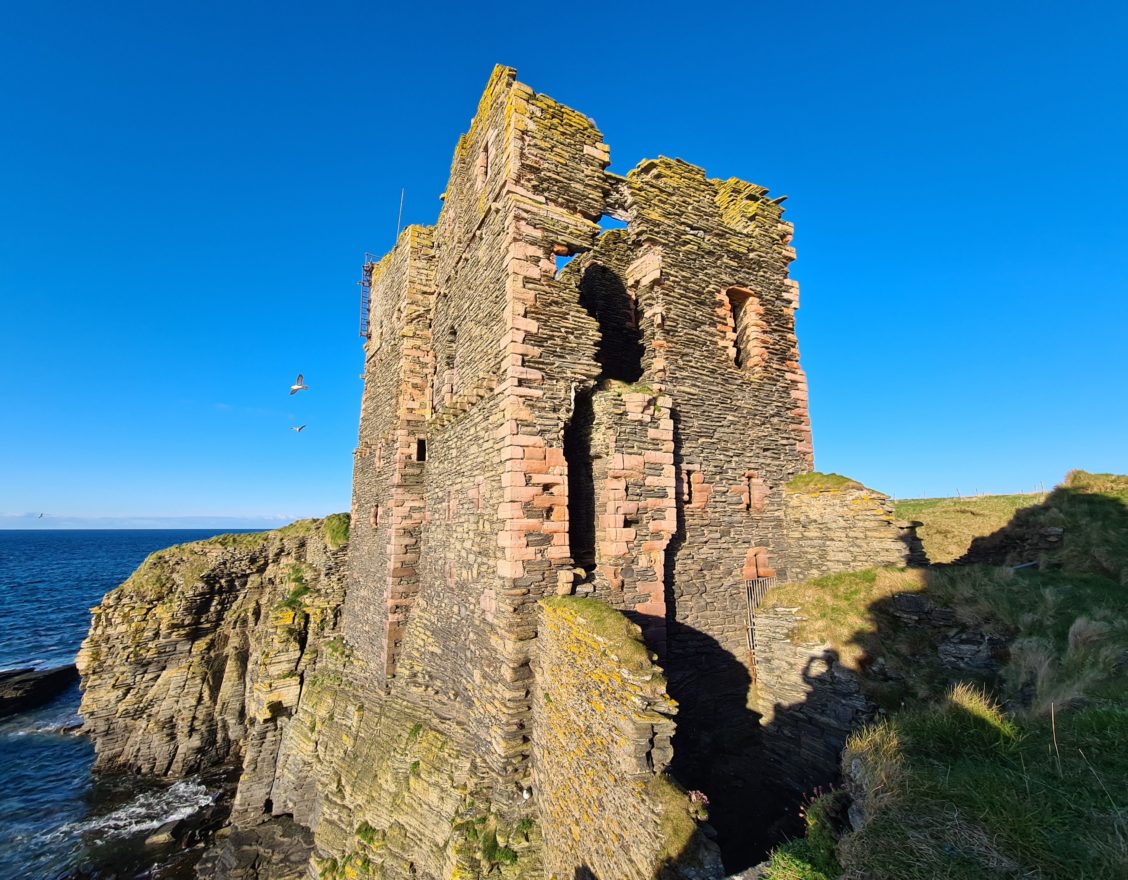 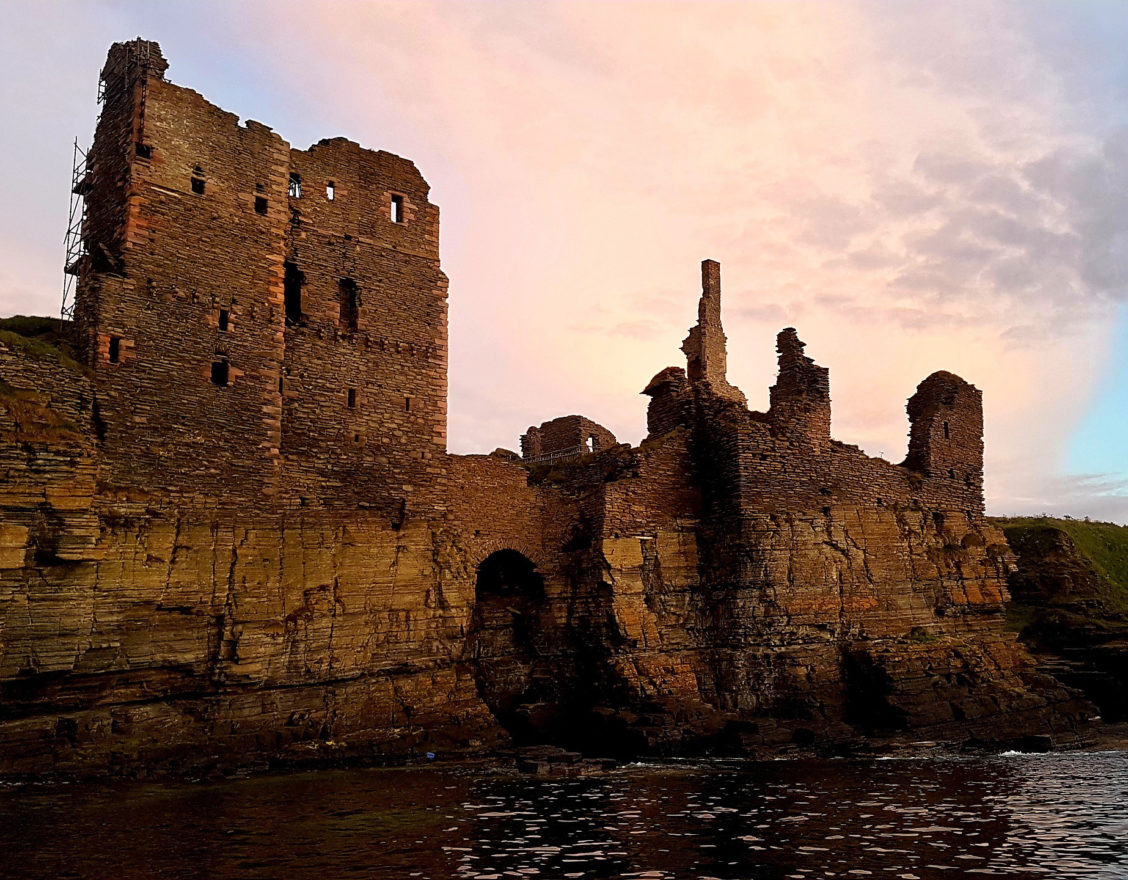 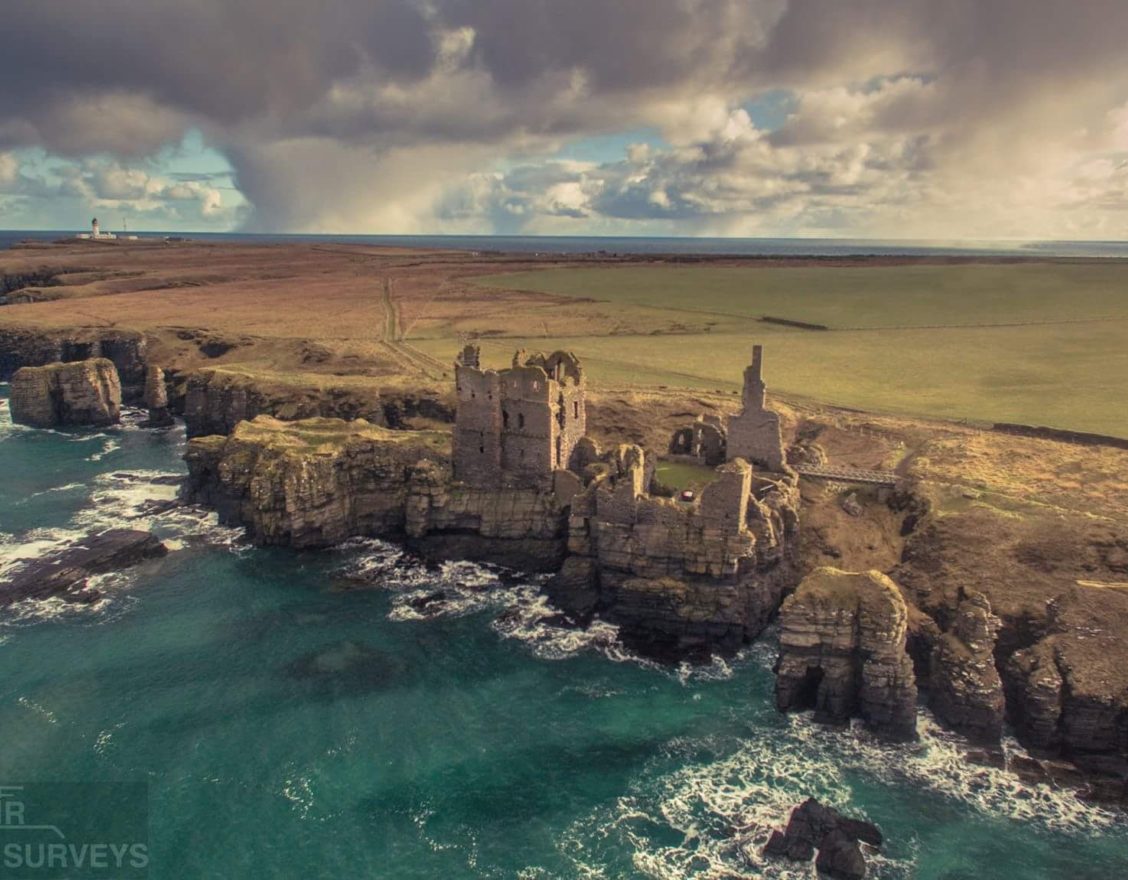 The impressive home of the Sinclairs. One of Caithness' finest castles, this perilously-perched castle stands atop the cliffs just north of Staxigoe, with exemplary views across Sinclair's Bay.

Once the seat of the Sinclair family (the Earls of Orkney and Caithness), Castle Sinclair Girnigoe commands a dramatic cliff top location. It is protected by the sea on one side, a geo on the other, and a rock cut ditch at the entrance. In its full glory it would have been a formidable and nearly impregnable presence, with moats, a drawbridge, and grand towers, looming over the sea. .

The castle bears the dual names of Sinclair and Girnigoe due to various phases of construction. Once thought to be two separate castles, archaeological research has concluded that it has always been one castle site, with subsequent additions over time. The oldest portions of the castle date back to the 1300s. This was the fortification of Castle Girnigoe, while the Sinclair portions includes the tower and other grander, more aesthetically focused modernizations added in the early 1600s.

A longstanding story maintained that the castle was stormed in 1690 and destroyed by cannon in the attempt to retake it. However the decline of the structures is less dramatic according to the Sinclair Trust. It would appear that the decline from grand castle to ruin was a slow one. Around 1680 George Sinclair of Keiss had the roofs and some walls removed to keep George Campbell from moving into the castle. Over the years, stones were robbed and the ruins continued to shrink. The castle is now managed by the Clan Sinclair Trust and is the only Scottish site to be on the World Monuments Fund “Watch List of the 100 Most Endangered Sites in the World.”

To access the castle, there is a small carpark with a 200 meter walk to the castle. You can park here, or incorporate the castle into a longer walk along the John O’Groats trail. A series of information panels tell the rich history, and beautifully illustrate the various stages of construction.

There are a variety of sea stacks adjacent to the castle’s cliffs, and Noss Head Lighthouse can be seen just along the coast to the east.

You can find out more about Sinclair Girnigoe Castle, as well as other archaeological and historical sites, on Canmore, Scotland’s historic environment record.

As with many of Scotland’s storied structures, it is very difficult to separate the fact and fiction of the castle’s history. One dark tale says that George Sinclair, 4th Earl of Caithness, imprisoned his son John in the tower for 7 years, then fed him salted beef and deprived him of water until he went crazy and died. Another earl is reputed to have made counterfeit money when the Sinclair family fell bankrupt.